The New Geography Of Jobs (Paperback) 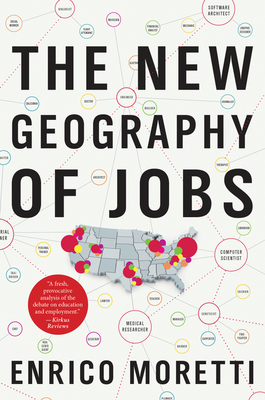 The New Geography Of Jobs (Paperback)


Not On Our Shelves—Ships in 1-5 Days
In The New Geography of Jobs, award-winning Berkeley economist Enrico Moretti looks at the major shifts taking place in the US economy and reveals the surprising winners and losers ​— ​specifically, which kinds of jobs will drive economic growth and where they’ll be located ​— ​while exploring how communities can transform themselves into dynamic innovation hubs.

“A timely and smart discussion of how different cities and regions have made a changing economy work for them ​— ​and how policymakers can learn from that to lift the circumstances of working Americans everywhere.” ​— ​Barack Obama

We’re used to thinking of the United States in opposing terms: red versus blue, haves versus have-nots. But today there are three Americas. At one extreme are the brain hubs ​— ​cities like San Francisco, Boston, and Durham ​— ​with workers who are among the most productive, creative, and best paid on the planet. At the other extreme are former manufacturing capitals, which are rapidly losing jobs and residents. The rest of America could go either way.

For the past thirty years, the three Americas have been growing apart at an accelerating rate. This divergence is one the most important developments in the history of the United States and is reshaping the very fabric of our society, affecting all aspects of our lives, from health and education to family stability and political engagement. But the winners and losers aren’t necessarily who you’d expect.

Enrico Moretti’s groundbreaking research shows that you don’t have to be a scientist or an engineer to thrive in one of the brain hubs. Carpenters, taxi drivers, teachers, nurses, and other local service jobs are created at a ratio of five-to-one in the brain hubs, raising salaries and standard of living for all. Dealing with this split ​— ​supporting growth in the hubs while arresting the decline elsewhere ​— ​is the challenge of the century, and The New Geography of Jobs lights the way.
Enrico Moretti is a professor of economics at the University of California, Berkeley, whose research has been supported by the National Science Foundation, the National Institutes of Health and has been featured in the New York Times, the Wall Street Journal, and Slate, among other publications.

"Moretti has written the most important book of the year, I can't recommend it enough. The Cal-Berkeley economic professor's book is extremely necessary for politicians and commentators alike, book that artfully slays myriad myths that cloud the economic debate. Brilliant."
—Forbes   "Enrico Moretti is a first-rate empirical researcher who has taught us much about the geographic impact of human capital and a variety of public investments. His book, The New Geography of Jobs, is well-written and filled with important facts and wise policy advice. It is an excellent addition to the literature on the economics of place. […] Both local policymakers and national leaders interested in policies with a geographical edge would do well to read the book."
—Edward Glaeser, author of The Triumph of the City   "Decade after decade, smart and educated people flock away from Merced, Calif., Yuma, Ariz., Flint, Mich., and Vineland, N.J. In those places, less than 15 percent of the residents have college degrees. They flock to Washington, Boston, San Jose, Raleigh-Durham and San Francisco. In those places, nearly 50 percent of the residents have college degrees. As Enrico Moretti writes in The New Geography of Jobs, the magnet places have positive ecologies that multiply innovation, creativity and wealth. The abandoned places have negative ecologies and fall further behind. This sorting is self-reinforcing, and it seems to grow more unforgiving every year."
—David Brooks, The New York Times

"The New Geography of Jobs, examines how and why hiring is stronger in some U.S. cities than in others."
—PBS NewsHour   "[A] persuasive look at why some U.S. cities have prospered in recent decades while others have declined."
—Businessweek   "In a new book, The New Geography of Jobs, University of California at Berkeley economics professor Enrico Moretti argues that for each job in the software, technology and life-sciences industries, five new jobs are indirectly created in the local economy. The jobs range from yoga instructors to restaurant owners. Mr. Moretti calculated such a multiplier effect by examining U.S. Census Bureau data from eight million workers in 320 areas during the past 30 years. Mr. Moretti says the data support the argument that technology innovators are one of the most important engines of job creation in the U.S.—with three of those five jobs going to people without college degrees."
—The Wall Street Journal   "Moretti has written a clear and insightful account of the economic forces that are shaping America and its regions, and he rightly celebrates human capital and innovation as the fundamental sources of economic development."
—The New Republic   "Compelling"
—Slate   "Whatever this month unemployment report turns out to be, it's probably not going to be great news for the Rust Belt. Best guesses are manufacturing jobs are still scarce. Meanwhile, new economy places like Silicon Valley continue to thrive. The difference? Location, location, location. So says economist Enrico Moretti in his latest book, The New Geography of Jobs."
—NPR MarketPlace   "A bold vision."
—MIT Sloan Management Review   "It is a great and disturbing book about the sweeping changes that are going on in American communities."
—Reuters   "Moretti’s book suggests that for each additional job in the average high-tech firm, five additional jobs are created outside that firm in the local community."
—NPR All T —