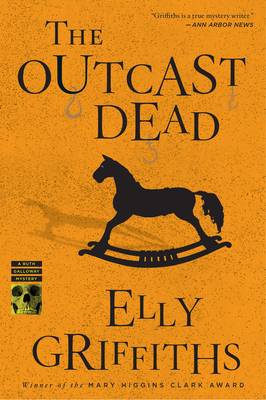 This is book number 6 in the Ruth Galloway Mysteries series.

Ruth Galloway uncovers the bones of what might be a notorious Victorian child murderess and a baby snatcher known as "The Childminder" threatens modern-day Norfolk in this irresistible mystery from Elly Griffiths.

The service of the Outcast Dead is held annually in Norwich, commemorating the bodies in the paupers’ graves. This year’s proceedings hold special interest for forensic archaeologist Ruth Galloway, who has just unearthed the notorious Mother Hook, hanged in 1867 at Norwich Castle for killing multiple children. Now Ruth is reluctantly starring in a TV special, working alongside the alluring historian Dr. Frank Barker. Nearby, DCI Harry Nelson is investigating the case of three children found dead in their home when another child is abducted. A kidnapper dubbed the Childminder claims responsibility, but is the Childminder behind the deaths too? The team races to find out—and after a child close to everyone involved disappears, the stakes couldn’t be higher.

“An uncommon, down-to-earth heroine whose acute insight, wry humor, and depth of feeling make her a thoroughly engaging companion.”—Erin Hart, Agatha– and Anthony Award–nominated author of Haunted Ground and Lake of Sorrows

Elly Griffiths’s Ruth Galloway novels have been praised as “gripping” (Louise Penny), “highly atmospheric,” (New York Times Book Review), and “must-reads for fans of crime fiction” (Associated Press). She is the winner of the 2010 Mary Higgins Clark Award.
ELLY GRIFFITHS is the author of the Ruth Galloway and Brighton mystery series, as well as the standalone novels The Stranger Diaries, winner of the Edgar Award for Best Novel, and The Postscript Murders. She is the recipient of the CWA Dagger in the Library Award and the Mary Higgins Clark Award. She lives in Brighton, England.

"What connection could the discovery of a notorious child killer’s corpse have to a new series of unnerving crimes? Forensic archaeologist Ruth Galloway thinks that the body she’s unearthed near the walls of Norwich Castle may be that of Mother Hook, a woman who took in unwanted children, possibly sold their bodies and was hanged for murder in 1867. . . . Griffiths lovingly develops the complicated, often testy relationships between the continuing characters in the course of a mystery perhaps a shade less exciting than her usual fare."--Kirkus Reviews "Griffiths bases her title and the book’s opening scene on an actual ceremony for “the outcast dead” (paupers and prostitutes long ago flung into a mass grave), held every year at Cross Bones Graveyard in London. . . . Griffiths deftly blends the themes of two women accused of child killing. Then she turns up the heat under this seething cauldron of blame and guilt by having two Norwichchildren kidnapped. A deft blend of death in the past, death in the present, and death chillingly close to occurring."--Booklist —