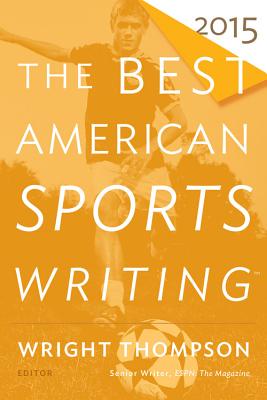 
Not On Our Shelves—Ships in 1-5 Days
For twenty-five years, The Best American Sports Writing has built a solid reputation by showcasing the greatest sports journalism of the past year, culled from hundreds of national, regional, and specialty print and digital publications. Wright Thompson, many times included in this volume over the years, takes his turn at the helm by curating this exceptional collection. The only shared trait among these diverse pieces is the extraordinarily high caliber of writing, but collectively they tap into the pure passion that can only come from sports. And for all aspiring sports writers, says Thompson, “these selections are both road map and compass.”
The Best American Sports Writing 2015 includes
Don Van Natta Jr., Chris Ballard, Katie Baker, Christopher Beam, Wells Tower, Seth Wickersham, Ariel Levy
and others
WRIGHT THOMPSON, guest editor, started his sports writing career as a student at the University of Missouri, where he covered sports for the Columbia Missourian. He interned at the Times-Picayune in New Orleans and worked as the LSU beat writer. He then moved to the Kansas City Star, where he covered a wide variety of sports. In 2006 he joined ESPN.com and ESPN: The Magazine as a senior writer. He lives in Oxford, Mississippi.

GLENN STOUT, series editor for The Best American Sports Writing since its inception, is the author of Young Woman and the Sea and Fenway 1912. He serves as the long-form editor for SB Nation and lives in Alburgh, Vermont.

Glenn Stout is a writer, author, and editor, and served as series editor of The Best American Sports Writing, and founding editor of The Year’s Best Sports Writing. He is also the author of Tiger Girl and the Candy Kid, Fenway 1912, Nine Months at Ground Zero, and many other award-winning and best-selling books. He also served as a consultant on the Disney+ film adaptation of Young Woman and the Sea. Stout lives in Lake Champlain in Vermont.