The Big Picture: The Fight for the Future of Movies (Hardcover) 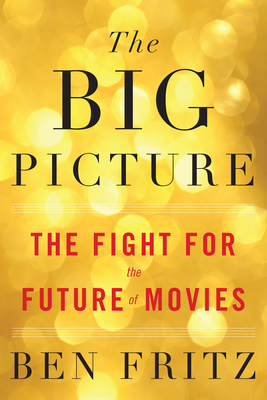 The Big Picture: The Fight for the Future of Movies (Hardcover)

In the past decade, Hollywood has endured a cataclysm on a par with the end of silent film and the demise of the studio system. Stars and directors have seen their power dwindle, while writers and producers lift their best techniques from TV, comic books, and the toy biz. The future of Hollywood is being written by powerful corporate brands like Marvel, Amazon, Netflix, and Lego, as well as censors in China.

Ben Fritz chronicles this dramatic shakeup with unmatched skill, bringing equal fluency to both the financial and entertainment aspects of Hollywood. He dives deeply into the fruits of the Sony hack to show how the previous model, long a creative and commercial success, lost its way. And he looks ahead through interviews with dozens of key players at Disney, Marvel, Netflix, Amazon, Imax, and others to discover how they have reinvented the business. He shows us, for instance, how Marvel replaced stars with “universes,” and how Disney remade itself in Apple’s image and reaped enormous profits.

But despite the destruction of the studios’ traditional playbook, Fritz argues that these seismic shifts signal the dawn of a new heyday for film. The Big Picture shows the first glimmers of this new golden age through the eyes of the creative mavericks who are defining what our movies will look like in the new era.

BEN FRITZ is an editor for the Wall Street Journal. He previously covered Hollywood for the Journal, the Los Angeles Times and Variety and is coauthor of the best-selling All the President's Spin. A graduate of Swarthmore College, he lives in Los Angeles.

"Fritz uses his skills as both a financial journalist and a natural storyteller to spin a narrative that is detailed, funny and a little terrifying. Anyone with a love for intelligent cinema made for discerning adults should be concerned."—The Globe and Mail

“The Big Picture is a must-read. It’s an informative, entertaining, often maddening look at how the film industry ended up where it is today . . . Pick up Fritz’s book. I guarantee you’ll likely power through it in one sitting, unable to put it down.”—Slashfilm

"Fritz offers fascinating tidbits in his unpacking, and argues that we're entering a new golden age of moviemaking."—Entertainment Weekly

“Fritz’s book is a fascinating behind-the-scenes glimpse at the forces that determine what gets played at the local cineplex.”—Publishers Weekly

“The Big Picture holds the reader’s attention by telling the stories of senior executives whose careers were destroyed or made by the changes in the entertainment industry.  Mr. Fritz culled the fruits of the infamous Sony hack to paint a vivid portrait of life inside the studio as it struggled to respond to the structural challenges it faced.”—The New York Times

"A definitive history of the film business in the 21st century."—In Reel Deep

“Ben Fritz crafts an electrifying and essential book that carefully chronicles how Hollywood tradition is collapsing and new models are fueling the future. A must-read.”—Ava DuVernay, director of A Wrinkle in Time, Selma, and 13th

"The best book on Hollywood I’ve read in a long time. Fritz explains how and why the invasion of the big buck comic book franchises crushed the Hollywood we once knew.”—Peter Biskind, author of Easy Riders, Raging Bulls: How the Sex, Drugs, and Rock ’n Roll Generation Saved Hollywood

"An absorbing and insightful chronicle of the massive upheaval in the movie industry over the past 10 years. Fritz uses his skill as a reporter to meld the financial and creative aspects of a business undergoing radical transformation into a compelling narrative. It’s a great read not just for those of us who work in the industry, but for anyone with a passion for film.” —Jason Blum, producer of Get Out, Split, Whiplash

“A great read for anyone who loves movies or the movie business and eye opening for anyone who cares about the future of our industry, whether they agree with Ben's provocative analysis or not.”—Ron Meyer, vice chairman, NBCUniversal and co-founder, Creative Artists Agency

“For those looking for inside scoops on the hidden relationships among movie studios, movie development, and choosing actors, this book is a treasure house.”—Kirkus Reviews