$2.00 A Day: Living on Almost Nothing in America (Paperback) 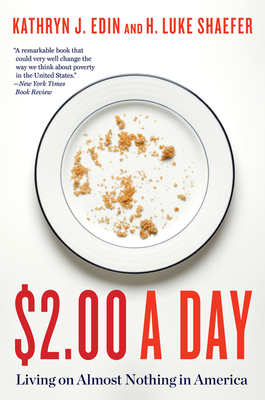 $2.00 A Day: Living on Almost Nothing in America (Paperback)


Not On Our Shelves—Ships in 1-5 Days
A New York Times Notable Book of the Year
The story of a kind of poverty in America so deep that we, as a country, don't even think exists—from a leading national poverty expert who “defies convention.” (The New York Times)
Jessica Compton’s family of four would have no income if she didn’t donate plasma twice a week at her local donation center in Tennessee. Modonna Harris and her teenage daughter, Brianna, in Chicago, often have no food but spoiled milk on weekends.
After two decades of brilliant research on American poverty, Kathryn Edin noticed something she hadn’t seen before—households surviving on virtually no cash income. Edin teamed with Luke Shaefer, an expert on calculating incomes of the poor, to discover that the number of American families living on $2.00 per person, per day, was one and a half million households, including about three million children. Where do these families live? How did they get so desperately poor?
Through this book’s eye-opening analysis and many compelling profiles, moving and startling answers emerge. $2.00 a Day delivers provocative ideas to our national debate on income inequality.
“Powerful . . . Presents a deeply moving human face that brings the stunning numbers to life. It is an explosive book . . . The stories will make you angry and break your heart.”—American Prospect
“Harrowing . . . [An] important and heart-rending book, in the tradition of Michael Harrington’s The Other America.”—Los Angeles Times
KATHRYN J. EDIN is one of the nation’s leading poverty researchers, recognized for using both quantitative research and direct, in-depth observation to illuminate key mysteries about people living in poverty: “In a field of poverty experts who rarely meet the poor, Edin usefully defies convention” (The New York Times). Her books include Promises I Can't Keep: WhyPoor Women Put Motherhood Before Marriage and Doing the Best I Can:Fatherhood in the Inner City. In 2014, Edin was named a Bloomberg Distinguished Professor of Sociology and Public Health at Johns Hopkins University. She is now a professor of sociology and public affairs at the Woodrow Wilson School of Public and International Affairs at Princeton University.

H. LUKE SHAEFER, Ph.D. is the Hermann and Amalie Kohn Professor of Social Justice and Social Policy and Associate Dean for Research and Policy Engagement at the Gerald R. Ford School of Public Policy at the University of Michigan. He is also a professor of social work and the inaugural director of Poverty Solutions, an interdisciplinary, presidential initiative that partners with communities and policymakers to find new ways to prevent and alleviate poverty.

“A remarkable book that could very well change the way we think about poverty in the United States . . .  This essential book is a call to action, and one hopes it will accomplish what Michael Harrington’s ‘The Other Americans’ achieved in the late 1960s—arousing both the nation’s consciousness and conscience about the plight of a growing number of invisible citizens.  The rise of such absolute poverty since the passage of welfare reform belies all the categorical talk about opportunity and the American dream.” —The New York Times Book Review   "With any luck (calling Bernie Sanders) this important book will spark election year debate over how America cares for its most vulnerable." —Mother Jones   “Affluent Americans often cherish the belief that poverty in America is far more comfortable than poverty in the rest of the world. Edin and Shaefer's devastating account of life at $2 or less a day blows that myth out of the water. This is world class poverty at a level that should mobilize not only national alarm, but international attention.”—Barbara Ehrenreich, author of Nickeled and Dimed   "In $2.00 A Day, Kathy Edin and Luke Shaefer reveal a shameful truth about our prosperous nation:  many—far too many—get by on what many of us spend on coffee each day.  It's a chilling book, and should be essential reading for all of us." —Alex Kotlowitz, author of There Are No Children Here   “Kathryn Edin and Luke Shaefer deliver an incisive pocket history of 1990s welfare reform—and then blow the lid off what has happened in the decades afterward.  Edin’s and Shaefer’s portraits of people in Chicago, Mississippi, Tennessee, Baltimore, and more forced into underground, damaging survival strategies, here in first-world America, are truly chilling.  This is income inequality in America at its most stark and most hidden.” —Michael Eric Dyson, author of Come Hell or High Water: Hurricane Katrina and the Color of Disaster   “Kathryn Edin and Luke Shaefer, with compelling statistics and wrenching human stories, illustrate how—with incomes far below the pay of low-wage jobs that cripples families by the millions—a shocking number of Americans live in an almost unimaginable depth of poverty, with near-zero incomes. We have let the bottom go out of the American economy. This powerful book should be required reading for everyone.” —Peter Edelman, Carmack Waterhouse  Professor of Law, Georgetown Law Center and author, So Rich So Poor: Why It’s So Hard to End Poverty in America     “This searing look at extreme poverty deftly mixes policy research and heartrending narratives... Mixing academic seriousness and deft journalistic storytelling, this work may well move readers to positive action.”  —Publishers Weekly, starred review   “An eye-opening account of the lives ensnared in the new poverty cycle.”   —Kirkus Reviews   “A close-up, heartbreaking look at rising poverty and income inequality in the U.S.”  —Booklist  —