The Children Of Húrin (Paperback) 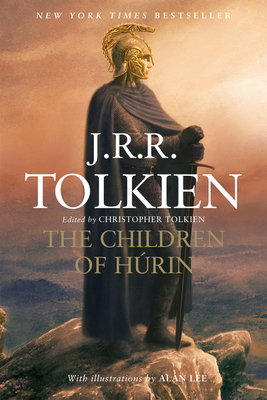 The Children Of Húrin (Paperback)

The Children of Húrin is the first complete book by J.R.R.Tolkien since the 1977 publication of The Silmarillion. This paperback edition includes eight color paintings by renowned Tolkien artist Alan Lee, plus a black-and-white map.

Six thousand years before the One Ring is destroyed, Middle-earth lies under the shadow of the Dark Lord Morgoth. The greatest warriors among elves and men have perished, and all is in darkness and despair. But a deadly new leader rises, Túrin, son of Húrin, and with his grim band of outlaws begins to turn the tide in the war for Middle-earth—awaiting the day he confronts his destiny and the deadly curse laid upon him.

CHRISTOPHER TOLKIEN (1924–2020) was the third son of J.R.R. Tolkien. Appointed by Tolkien to be his literary executor, he devoted himself to the editing and publication of unpublished writings, notably The Silmarillion, Unfinished Tales, and The History of Middle-earth.