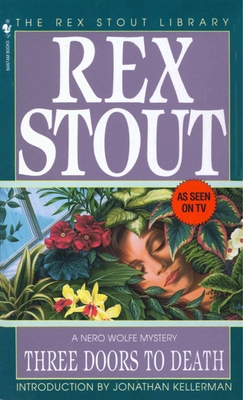 This is book number 16 in the Nero Wolfe series.

One by one they knock on the door of the incomparable Nero Wolfe, each with a case more perplexing than the one before. First comes the niece of a man who committed suicide by jumping naked into a geyser, only to return just in time to be murdered. Then it’s the strange case of the murder victim’s family covering up for the real killer, while a chef stews in jail. Finally a master horticulturist discovers the woman he wants to marry: dead and cooling in a hothouse. Three knocks on the door. Three cases of crime. Enter a world of mendacity, mixed motives, and masterful detection on West Thirty-fifth Street, where murder is always at home.

“It is always a treat to read a Nero Wolfe mystery. The man has entered our folklore.”—The New York Times Book Review

A grand master of the form, Rex Stout is one of America’s greatest mystery writers, and his literary creation Nero Wolfe is one of the greatest fictional detectives of all time. Together, Stout and Wolfe have entertained—and puzzled—millions of mystery fans around the world. Now, with his perambulatory man-about-town, Archie Goodwin, the arrogant, gourmandizing, sedentary sleuth is back in the original seventy-three cases of crime and detection written by the inimitable master himself, Rex Stout.
Rex Stout (1886–1975) wrote dozens of short stories, novellas, and full-length mystery novels, most featuring his two indelible characters, the peerless detective Nero Wolfe and his handy sidekick, Archie Goodwin.
“It is always a treat to read a Nero Wolfe mystery. The man has entered our folklore.”—The New York Times Book Review