The Complete Book of Solitaire and Patience Games: The Most Comprehensive Book of Its Kind: Over 225 Games (Mass Market) 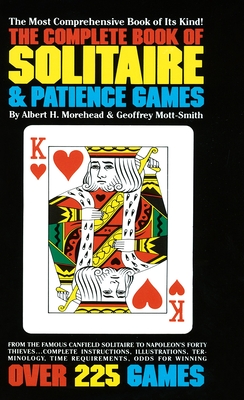 The Complete Book of Solitaire and Patience Games: The Most Comprehensive Book of Its Kind: Over 225 Games (Mass Market)

Endless hours of do-it-yourself fun! Over 225 of the most challenging and fascinating card games ever invented. In addition to including all of the best and most frequently enjoyed games of solitaire—like CANFIELD, KLONDIKE, PATIENCE—authors Morehead and Mott-Smith have added a generous selection of brand-new games to the battle of wits against chance . . . try your skill at BOOMERANG, BRISTOL, SUDDEN DEATH.

It’s here—everything you need to know about solitaire and patience games!
Albert H. Morehead (1909–1966), known as the “modern Hoyle,” was the games editor of the New York Times, a lexicographer, and the author of more than 50 books on card games. Some of his works include The Complete Book of Solitaire and Patience Games and the world-famous Contract Bridge Summary.

Geoffrey Mott-Smith was cochairman of the ACBL Laws Commission, editor of the ACBL Bridge Bulletin 1935–36, a contributor to The Bridge World, a writer, and a cryptographer. During World War II, Mott-Smith served as chief instructor for the OSS in the training of cryptographers and cryptanalysts. He wrote or cowrote more than 29 books on games and served as games consultant for the Association of American Playing Card Manufacturers.