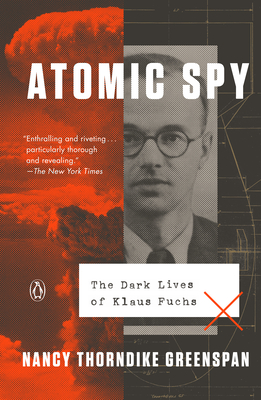 
On Our Shelves Now at:
"Nancy Greenspan dives into the mysteries of the Klaus Fuchs espionage case and emerges with a classic Cold War biography of intrigue and torn loyalties. Atomic Spy is a mesmerizing morality tale, told with fresh sources and empathy." --Kai Bird, author of The Good Spy and coauthor of American Prometheus: The Triumph and Tragedy of J. Robert Oppenheimer

The gripping biography of a notorious Cold War villain--the German-born British scientist who handed the Soviets top-secret American plans for the plutonium bomb--showing a man torn between conventional loyalties and a sense of obligation to a greater good.

German by birth, British by naturalization, Communist by conviction, Klaus Fuchs was a fearless Nazi resister, a brilliant scientist, and an infamous spy. He was convicted of espionage by Britain in 1950 for handing over the designs of the plutonium bomb to the Russians, and has gone down in history as one of the most dangerous agents in American and British history. He put an end to America's nuclear hegemony and single-handedly heated up the Cold War. But, was Klaus Fuchs really evil?

Using archives long hidden in Germany as well as intimate family correspondence, Nancy Thorndike Greenspan brings into sharp focus the moral and political ambiguity of the times in which Fuchs lived and the ideals with which he struggled. As a university student in Germany, he stood up to Nazi terror without flinching, and joined the Communists largely because they were the only ones resisting the Nazis. After escaping to Britain in 1933, he was arrested as a German émigré--an "enemy alien"--in 1940 and sent to an internment camp in Canada. His mentor at university, renowned physicist Max Born, worked to facilitate his release. After years of struggle and ideological conflict, when Fuchs joined the atomic bomb project, his loyalties were firmly split. He started handing over top secret research to the Soviets in 1941, and continued for years from deep within the Manhattan Project at Los Alamos. Greenspan's insights into his motivations make us realize how he was driven not just by his Communist convictions but seemingly by a dedication to peace, seeking to level the playing field of the world powers.

With thrilling detail from never-before-seen sources, Atomic Spy travels across the Germany of an ascendant Nazi party; the British university classroom of Max Born; a British internment camp in Canada; the secret laboratories of Los Alamos; and Eastern Germany at the height of the Cold War. Atomic Spy shows the real Klaus Fuchs--who he was, what he did, why he did it, and how he was caught. His extraordinary life is a cautionary tale about the ambiguity of morality and loyalty, as pertinent today as in the 1940s.
Nancy Thorndike Greenspan is the author of The End of the Certain World and the co-author of four books with her late husband, child psychiatrist Stanley Greenspan. She lives in Bethesda, Maryland.
Praise for Atomic Spy

One of USA Today's "Books Not to Miss"

"Spies make for enticing biographies. Well told, their stories combine the drama of a police procedural (how did they do it?) with the ambiguities of a psychological thriller (why did they do it?). Nancy Thorndike Greenspan seeks to answer both those questions in the very well told Atomic Spy. … a deeply nuanced and sympathetic portrait of a scientist-spy with the best of intentions — an original addition to the shelf of Fuchs biographies."—Nature

"A detailed and authoritative yet equally interesting and readable study . . . From student to scientist to spy, Fuchs is portrayed as a careful and quiet yet passionate man who nevertheless persisted." —Library Journal

"This richly detailed work . . . blurs the lines between courage and treachery in thought-provoking ways."—Publishers Weekly

“Nancy Greenspan dives into the mysteries of the Klaus Fuchs espionage case and emerges with a classic Cold War biography of intrigue and torn loyalties. Atomic Spy is a mesmerizing morality tale, told with fresh sources and empathy.” —Kai Bird, author of The Good Spy: The Life and Death of Robert Ames and coauthor of American Prometheus: The Triumph and Tragedy of J. Robert Oppenheimer

“Greenspan sheds new light on the character, family, and motives of the notorious spy who gave the Soviet Union a blueprint for the atomic bomb. Klaus Fuchs’s espionage and its consequences raise timely questions about blind devotion to an ideology.”—Cynthia C. Kelly, President, Atomic Heritage Foundation

“A riveting read. Greenspan skillfully and with nuance describes how one of the Manhattan Project’s prominent physicists, led to Communism by early struggles against Nazism, eventually became a important spy for the Russians. A tale of intrigue, competing moralities and human fallibility.” —Gino Segrè, author of The Pope of Physics and Ordinary Geniuses

“The Soviets had more than a half-dozen spies inside the Manhattan Project, but none was more important than Fuchs, a senior physicist in the theoretical division of the plutonium bomb project. Greenspan takes us through the evidence with assurance. Most impressive is her detailed exposition of the strengths and weaknesses of MI5’s investigations of Fuchs in the 1930s and 1940s as well as Fuchs’ evolution from German Social Democrat to devoted Communist under the impact of Hitler’s rise to power.”—John Earl Haynes, coauthor of Spies: the Rise and Fall of the KGB in America