A Hunter-Gatherer's Guide to the 21st Century: Evolution and the Challenges of Modern Life (Hardcover) 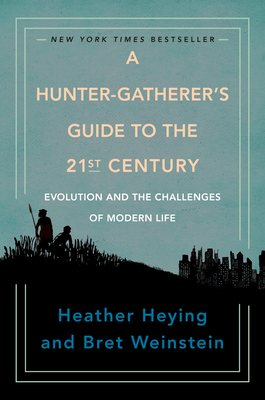 A Hunter-Gatherer's Guide to the 21st Century: Evolution and the Challenges of Modern Life (Hardcover)


On Our Shelves Now at:
A provocative exploration of the tension between our evolutionary history and our modern woes—and what we can do about it.

We are living through the most prosperous age in all of human history, yet we are listless, divided, and miserable. Wealth and comfort are unparalleled, but our political landscape is unmoored, and rates of suicide, lone­liness, and chronic illness continue to skyrocket. How do we explain the gap between these truths? And how should we respond?

For evolutionary biologists Heather Heying and Bret Weinstein, the cause of our troubles is clear: the accelerat­ing rate of change in the modern world has outstripped the capacity of our brains and bodies to adapt. We evolved to live in clans, but today many people don’t even know their neighbors’ names. In our haste to discard outdated gender roles, we increasingly deny the flesh-and-blood realities of sex—and its ancient roots. The cognitive dissonance spawned by trying to live in a society we are not built for is killing us.

In this book, Heying and Weinstein draw on decades of their work teaching in college classrooms and explor­ing Earth’s most biodiverse ecosystems to confront today’s pressing social ills—from widespread sleep deprivation and dangerous diets to damaging parenting styles and back­ward education practices. Asking the questions many mod­ern people are afraid to ask, A Hunter-Gatherer’s Guide to the 21st Century outlines a science-based worldview that will empower you to live a better, wiser life.
Heather Heying and Bret Weinstein are evolutionary biologists who have been invited to ad­dress the US Congress, the Department of Justice, and the Department of Education, and have spoken before audi­ences across the globe. They both earned PhDs in Biology from the University of Michigan, where their research on evolution and adaptation earned awards for its quality and innovation. They have been visiting fellows at Princeton University, and before that were professors at the Ever­green State College for fifteen years. They resigned from Evergreen in the wake of 2017 campus riots that focused in part on their opposition to a day of racial segregation and other college “equity” proposals. They cohost weekly livestreams of the DarkHorse podcast.
“Husband and wife team Heather Heying and Bret Weinstein bring their vast knowledge of evolutionary biology to bear on the problems that beset us. Wide-ranging and illuminating, A Hunter-Gatherer’s Guide to the 21st Century posits an intriguing, surprising, and profound view of human nature.”
—DR. JORDAN B. PETERSON, author of Beyond Order, 12 Rules for Life, and Maps of Meaning

“A Hunter-Gatherer’s Guide to the 21st Century is the human story retold in beautiful language and moving metaphors. Heying and Weinstein are professorial in the best possible sense: they exemplify the intellectual humility, nuanced thinking, and love of learning that a great liberal arts education should nurture. Everyone who is raising or educating kids, or who wants to change social systems, should first read this book.”
—JONATHAN HAIDT, coauthor of The Coddling of the American Mind and author of The Righteous Mind

“I have never read such a bold, well-researched, and succinct exploration of the puzzling predica­ment we find ourselves in. Anyone who wonders why the most comfortable society in history—our own—has such astronomical rates of depression, anxiety, and poor health will find abundant answers in A Hunter-Gatherer’s Guide to the 21st Century.”
—SEBASTIAN JUNGER, author of The Perfect Storm, War, Tribe, and Freedom

“Heather Heying and Bret Weinstein are the brilliant, irresistible professors every student dreams of having. In their hands, complex technical ideas become accessible—and exhilarating. A Hunter-Gatherer’s Guide to the 21st Century is based on serious science, but it reads like an adventure story.”
—CHRISTINA HOFF SOMMERS, philosopher, author, and host of The Factual Feminist

“A Hunter-Gatherer’s Guide to the 21st Century has given me at least five evolutionary concepts that have become central to my way of viewing the world.”
—JAMIE WHEAL, executive director of the Flow Genome Project and coauthor of Stealing Fire

“Bret and Heather are highly regarded evolutionary biologists, very clear thinkers and communica­tors, and as attested to by their notoriety from the madness that their school put them through, they value scientific truth over political correctness.”
—ROBERT SAPOLSKY, author of Behave and A Primate’s Memoir