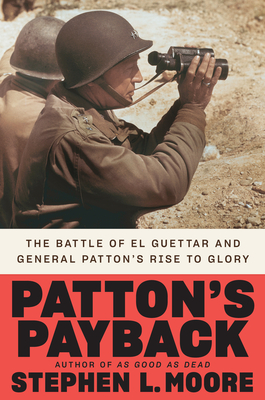 
On Our Shelves Now at:
A stirring World War II combat story of how the legendary George Patton reinvigorated a defeated and demoralized army corps, and how his men claimed victory over Germany’s most-feared general, Erwin Rommel

“Moore brings you to the battlefield and into the mind of a fearless military genius.”—Brian Kilmeade, bestselling author of The President and the Freedom Fighter • “Essential reading.”—Kevin Maurer, #1 NYT bestselling coauthor of No Easy Day • “[Moore] has a smooth prose style and a firm grasp of detail.”—The Wall Street Journal

In March 1943, in their first fight with the Germans, American soldiers in North Africa were pushed back fifty miles by Rommel’s Afrika Korps and nearly annihilated. Only the German decision not to pursue them allowed the Americans to maintain a foothold in the area. General Eisenhower, the supreme commander, knew he needed a new leader on the ground, one who could raise the severely damaged morale of his troops. He handed the job to a new man: Lieutenant General George Patton.

Charismatic, irreverent, impulsive, and inspiring, Patton possessed a massive ego and the ambition to match. But he could motivate men to fight. He had just ten days to whip his dispirited troops into shape, then throw them into battle against the Wehrmacht’s terrifying Panzers, the speedy and powerful German tanks that U.S. forces had never defeated. Patton, who believed he had fought as a Roman legionnaire in a previous life, relished the challenge to turn the tide of America’s fledgling war against Hitler—and the chance to earn a fourth star.
Stephen L. Moore, a sixth-generation Texan, is the author of multiple books on World War II, Vietnam, and Texas history, including As Good As Dead, Pacific Payback and Texas Rising.
PRAISE FOR PATTON’S PAYBACK

“[Stephen L. Moore] has a smooth prose style and a firm grasp of detail… Letters home, diaries and postwar interviews are the grist for Mr. Moore’s mill, and he has a gift for melding them into a coherent narrative.”—The Wall Street Journal

“Just when I thought I knew all about America's most famous general, George S. Patton, Stephen Moore emerges with this intimate portrait of the man and his incredible ability to motivate men in their darkest hour. Moore brings you to the battlefield and into the mind of a fearless military genius.”—Brian Kilmeade, New York Times bestselling author of The President and the Freedom Fighter and George Washington's Secret Six

“President Roosevelt called George Patton America’s ‘greatest fighting general,’ but in the hands of Stephen L. Moore he is more than that. Patton’s Payback offers an intimate portrait of the general at a time when the US Army was struggling to meet the Nazi threat. An origin story and battle narrative, Patton’s Payback is essential reading for anyone looking to understand the North Africa campaign and how it forged an American army capable of defeating Nazi Germany.”—Kevin Maurer, #1 New York Times bestselling coauthor of No Easy Day and author of Rock Force

“[Stephen L.] Moore skillfully tells how the American Army turned defeat into victory under Patton… Moore interviewed several of Patton’s surviving veterans and those tales bring to life Patton’s complex character… Readers interested in World War II and the books of James Holland and Alex Kershaw will enjoy this tale of the American victory in North Africa under Patton.”—Library Journal

“A fresh interpretation of Patton’s military career… It was in North Africa that the legend of Patton as a ruthless and aggressive commander was born. Moore helps us understand how that evolution occurred.”—Army magazine


PRAISE FOR THE WORK OF STEPHEN L. MOORE

“A master storyteller. Moore’s research is impressive, but his remarkable ability to relate the human story of everyday Americans in time of war is what really makes this book so hard to put down.”—John C. McManus, award-winning author of Island Infernos and Fire and Fortitude

“Moore offers what will soon be ranked a major military classic.”—Leatherneck