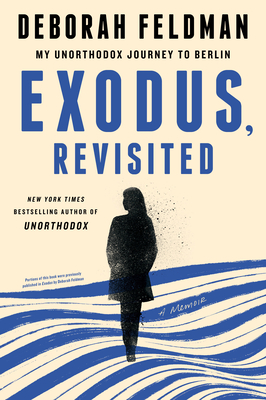 
In Stock—Click for Locations
The definitive follow-up to Unorthodox (the basis for the award-winning Netflix series)—now updated with more than 50 percent new material—the unforgettable story of what happened in the years after Deborah Feldman left a religious sect in Williamsburg in order to forge her own path in the world.

In 2009, at the age of twenty-three, Deborah Feldman packed up her young son and their few possessions and walked away from her insular Hasidic roots. She was determined to find a better life for herself, away from the oppression and isolation of her Satmar upbringing in Williamsburg, Brooklyn. And in Exodus, Revisited she delves into what happened next—taking the reader on a journey that starts with her beginning life anew as a single mother, a religious refugee, and an independent woman in search of a place and a community where she can belong.

Originally published in 2014, Deborah has now revisited and significantly expanded her story, and the result is greater insight into her quest to discover herself and the true meaning of home. Travels that start with making her way in New York expand into an exploration of America and eventually lead to trips across Europe to retrace her grandmother’s life during the Holocaust, before she finds a landing place in the unlikeliest of cities. Exodus, Revisited is a deeply moving examination of the nature of memory and generational trauma, and of reconciliation with both yourself and the world.
Deborah Feldman was raised in the Satmar Hasidic community in Williamsburg, Brooklyn. Her first memoir, Unorthodox, was a New York Times bestseller and the inspiration for the hit Netflix series. She lives in Berlin with her son.
Praise for Exodus, Revisited

“Exodus, Revisited is intriguing and intellectually satisfying… raises hard questions that are important to many people.”—The Washington Post

“Riveting.... Not only is the book beautifully written, but it deals with some of the most profound human emotions: longing to know one’s origins; anger at injustice; and romantic and parental love.... A barebones description of the storyline doesn’t even begin to do justice to this magnificent piece of literature, which will stand the test of time.... [A] captivating memoir that will find a wide audience.”—Library Reads (starred)

“An inspiring story of commitment to oneself follows a woman seeking true "home" after fleeing a repressive religious sect.”—Shelf Awareness (starred)

“A satisfying story of self-discovery.”—Kirkus

“The perfect follow-up, delving deeper into what inspired Feldman’s initial decision. Beyond her literal choice, Feldman also considers what it means to be Jewish and to have a homeland. It, like Unorthodox, is a beautifully-written meditation about the very essence of community.”—Bitch Magazine, "13 Books Feminists Should Read in August"

“Exodus, Revisited is a remarkable work that throws sharp light on prejudices within and outside the Jewish faith.”—Authorlink

“In her first memoir, Unorthodox, Feldman made the courageous choice to cut off ties with her family and the Satmar community of Williamsburg, Brooklyn. . . . Now a divorced woman in her twenties, Feldman chronicles the next phase of her life in her new book [Exodus]. . . . A quest of self-discovery . . . Some of the most powerful scenes come when Feldman retraces the path of her female ancestors in Hungary and confronts the anti-Semitism of contemporary Europe. . . . Feldman ultimately discovers that her rightful place is wherever she happens to be.”—The New York Times Book Review

“Feldman’s journey is undeniably and explicitly Jewish, but the aching need to find both a welcoming community and a sense of individuality is one that readers from all walks of life will be able to identify with. Those left unsatisfied with the abrupt ending to Unorthodox will enjoy the more hopeful conclusion to Feldman’s second book as well as her more mature and increasingly eloquent writing style.”—Booklist

“Overall, Exodus is a satisfying sequel to Unorthodox, which shows how Deborah Feldman went on to the next step after getting her own freedom from the bonds of a strictly insular society. . . . [A] chronicle of a continuing journey of self-discovery . . . There are many satisfying finds and revelations along the road, but there are also plenty of bumps, frustrations, disappointments, and pitfalls, which is expected when one spends their formative years being closed off from the rest of the outside world, and is confined to the boundaries of a Brooklyn neighborhood. . . . This book is more about the liberation of Deborah Feldman, and how she copes with this newfound sense of freedom and self-discovery, that can be a shock to some, or a declaration of independence for others.”—Stuart Nulman, Montreal Times

“One woman's search to understand herself and her Jewish heritage. . . . Rich in details of Jewish life and the lives of her grandparents in the World War II era, [Feldman] sensitively portrays the inner struggles of accepting the pervasive feeling of survivor guilt and her own desires to understand the woman she was becoming. . . . An enthralling account of how one Orthodox Jewish woman turned her back on her religion and found genuineness and validity in her new life.”—Kirkus