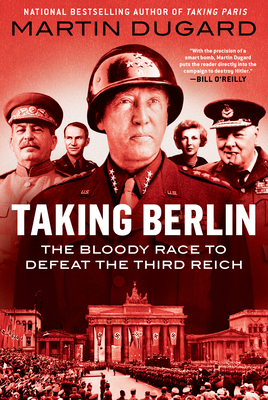 
On Our Shelves Now at:
From Martin Dugard, #1 New York Times bestselling coauthor of Bill O'Reilly's Killing series, comes a nonfiction thriller about the race between the Allies and Soviets to conquer the heart of Nazi Germany.

“Gripping, popular history at its page-turning best.”—Alex Kershaw • “With the precision of a smart bomb, Martin Dugard puts the reader directly into the campaign to destroy Hitler.”—Bill O’Reilly • “Spectacular... Taking Berlin is certain to be a massive hit with fans of both history and thrillers alike.”—Mark Greaney, bestselling author of the Gray Man series

Fall, 1944. Paris has been liberated, saved from destruction, but this diversion on the road to Berlin has given the Germans time to regroup. The American and British armies press on from the west, facing the enemy time and again in the Hurtgen Forest, during the Market-Garden invasion, and at the Battle of the Bulge, all while American general George Patton and British field marshal Bernard Montgomery vie for supremacy as the Allies’ top battlefield commander.

Meanwhile, the Soviets begin to squeeze Hitler’s crumbling Reich from the east. Led by Generals Zhukov and Konev, the Red Army launches millions of soldiers, backed by tanks, artillery, and warplanes, against the Germans, leaving death and scorched earth in their wake, pushing the Wehrmacht back toward their fatherland. As both the Anglo-American alliance and the Soviets set their sights on claiming the capital city of Nazi Germany, Churchill seeks to ensure Britain’s place in a new world divided by Roosevelt’s America and Stalin’s Soviet Union.

With a sweeping cast of historical figures, Taking Berlin is a pulse-pounding race into the final, desperate months of the Second World War and toward the fiery destruction of the Thousand-Year-Reich, chronicling a moment in history when allies become adversaries.
Martin Dugard is the New York Times bestselling author of several books of history, among them the Killing series, Into Africa, and The Explorers.
“Dugard writes with vibrant clarity and verve, bringing history to bold life… Taking Berlin is cinematic in its approach and epic in its scope, while told in a compact 300-plus pages... Another prime destination in this winning series.”—The Valdosta Daily Times

“Dugard's latest engaging history book features a fascinating narrative of intrigue in the waning days of WWII. From the perspectives of both the Allied and Axis powers, Dugard shows how victory often appeared as proximate as agonizing defeat.”—Booklist

“A kaleidoscopic account of the Allies’ campaign to capture Berlin in the final months of WWII… Dugard’s terse prose and use of present tense keeps the action humming, and he skillfully mines his subjects’ personal writings. This fast-paced history is well worth the read.”—Publishers Weekly

“Martin Dugard’s spectacular Taking Berlin is nonfiction more captivating than any fiction, offering a fresh and welcome take on the last year of the Second World War, perhaps the most dramatic months in the past century. Truly a work as important as it is entertaining, Taking Berlin is certain to be a massive hit with fans of both history and thrillers alike.”—Mark Greaney, #1 New York Times bestselling author of the Gray Man series

“With a master storyteller’s faultless pacing, Martin Dugard brings to life all the glory, tension, heroism and tragedy of the last months of the Third Reich. I loved this book—gripping, popular history at its page-turning best.”—Alex Kershaw, New York Times bestselling author of Against All Odds and The First Wave

“You may know the story, but you've never felt the story—until you read Taking Berlin.”—Bill O’Reilly