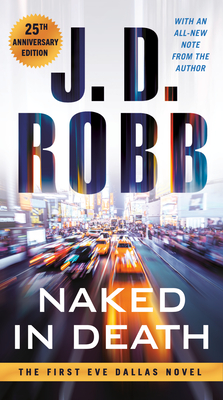 This is book number 1 in the In Death series.

THE 25th ANNIVERSARY EDITION OF THE FIRST NOVEL IN J. D. ROBB’S #1 NEW YORK TIMES BESTSELLING IN DEATH SERIES—INCLUDES A NEW NOTE FROM THE AUTHOR!

Eve Dallas is a New York police lieutenant hunting for a ruthless killer. In over ten years on the force, she's seen it all—and knows her survival depends on her instincts. And she's going against every warning telling her not to get involved with Roarke, an Irish billionaire—and a suspect in Eve's murder investigation. But passion and seduction have rules of their own, and it's up to Eve to take a chance in the arms of a man she knows nothing about—except the addictive hunger of needing his touch.
J. D. Robb is the pseudonym for a #1 New York Times bestselling author of more than 200 novels, including the bestselling In Death series. There are more than 500 million copies of her books in print.
Praise for Naked in Death

“Superstar Nora Roberts dons a new pseudonym and proves why she is one of the world's most remarkable storytellers in this ground-breaking novel of life and death in the 21st century...Superbly suspenseful and strikingly original.”—RT Book Reviews

“Eve, Roarke and the rest of the cast will enchant you, and the murder plots will enthrall you.”—The State (Columbia, S.C.)