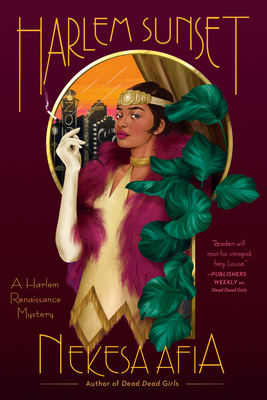 This is book number 2 in the A Harlem Renaissance Mystery series.

Named a 2022 People Magazine best book of the summer!

A riveting Harlem Renaissance Mystery featuring Louise Lloyd, a young Black woman working in a hot new speakeasy when she gets caught up in a murder that hits too close to home...

Harlem, 1927. Twenty-seven-year-old Louise Lloyd has found the perfect job! She is the new manager of the Dove, a club owned by her close friend Rafael Moreno. There Louise meets Nora Davies, one of the girls she was kidnapped with a decade ago. The two women—along with Rafael and his sister, Louise’s girlfriend, Rosa Maria—spend the night at the Dove, drinking and talking. The next morning, Rosa Maria wakes up covered in blood, with no memory of the previous night. Nora is lying dead in the middle of the dance floor.

Louise knows Rosa Maria couldn’t have killed Nora, but the police have a hard time believing that no one can remember anything at all about what happened. When Louise and Rosa Maria return to their apartment after being questioned by the police, they find the word GUILTY written across the living room wall in paint that looks a lot like blood. Someone has gone to great lengths to frame and terrify Rosa Maria, and Louise will stop at nothing to clear the woman she loves.
Twenty-four-year-old Nekesa Afia recently finished her undergrad degree (bachelor’s in journalism, with a minor in English) and is a publishing student. When she isn't writing, she’s dancing, sewing, and trying to pet every dog she sees. She’s been writing since she was a child and this is her second novel.
Praise for The Harlem Renaissance Mysteries

"This book was an engaging, captivating, suspenseful, and enjoyable historical mystery and character journey." Mystery and Suspense Magazine

"Suspenseful... Harlem Sunset excels at illustrating the culture of the late 1920s--and at capturing a woman dealing with her choices while simultaneously discovering what she wants in life."-Shelf Awareness

"A vivid crime story and an engrossing depiction of an era."-Kirkus

“In this terrific series opener, Afia evokes the women’s lives in all their wayward and beautiful glory, especially the abruptness with which their dreams, hopes and fears cease to exist.”—The New York Times

“Tightly paced, razor sharp, and with a wonderful no-nonsense protagonist, Dead Dead Girls made me fly through the pages. Ms. Afia is one to watch.”—Evie Dunmore, USA Today bestselling author of A Rogue of One’s Own

“Debut author Nekesa Afia brings 1920s Harlem to life in this twisty tale of murder and betrayal where nothing and no one is as it seems.”—Victoria Thompson, USA Today bestselling author of Murder on Wall Street

"'Though she be but little, she is fierce.' Shakespeare might as well have been describing Louise Lloyd, the flawed yet fantastic protagonist in Afia's debut set in 1920s Harlem. I loved the world that Afia created and can't wait to follow Lou and her friends on their next adventure. Come for the wonderfully diverse and twisty mystery, stay for the amazing 20s slang and fashion." - Mia P. Manansala, author of Arsenic and Adobo