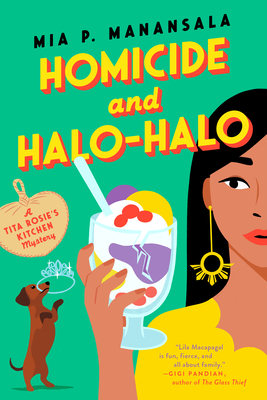 
On Our Shelves Now at:
Death at a beauty pageant turns Tita Rosie's Kitchen upside down in the latest entry of this witty and humorous cozy mystery series by Mia P. Manansala.

Things are heating up for Lila Macapagal. Not in her love life, which she insists on keeping nonexistent despite the attention of two very eligible bachelors. Or her professional life, since she can't bring herself to open her new café after the unpleasantness that occurred a few months ago at her aunt's Filipino restaurant, Tita Rosie's Kitchen. No, things are heating up quite literally, since summer, her least favorite season, has just started.

To add to her feelings of sticky unease, Lila's little town of Shady Palms has resurrected the Miss Teen Shady Palms Beauty Pageant, which she won many years ago—a fact that serves as a wedge between Lila and her cousin slash rival, Bernadette. But when the head judge of the pageant is murdered and Bernadette becomes the main suspect, the two must put aside their differences and solve the case—because it looks like one of them might be next.
Mia P. Manansala is a writer from Chicago who loves books, baking, and badass women. She uses humor (and murder) to explore aspects of the Filipino diaspora, queerness, and her millennial love for pop culture.

She is the winner of the 2018 Hugh Holton Award, the 2018 Eleanor Taylor Bland Crime Fiction Writers of Color Award, the 2017 William F. Deeck-Malice Domestic Grant for Unpublished Writers, and the 2016 Mystery Writers of America/Helen McCloy scholarship. She's also a 2017 Pitch Wars alum and 2018-2019 mentor.
"While the follow-up to Arsenic and Adobo is a cozy mystery, it’s darker, dealing with PTSD, predatory behavior, dismissive attitudes toward mental health, and other issues. Filipino American food and culture, as well as family and community, remain essential elements in the story."—Library Journal, starred review