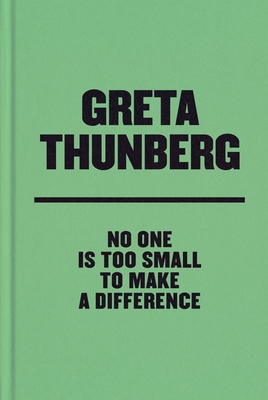 
On Our Shelves Now at:
An illustrated edition of the groundbreaking speeches of Greta Thunberg, Time's Person of the Year and the young climate activist who has become the voice of a generation. Includes 61 color photographs from Greta's incredible journey.

“Everything needs to change. And it has to start today.”

In August 2018 a fifteen-year-old Swedish girl, Greta Thunberg, decided not to go to school one day in order to protest the climate crisis. Her actions sparked a global movement, inspiring millions of students to go on strike for our planet, forcing governments to listen, and earning her a Nobel Peace Prize nomination.

No One Is Too Small to Make A Difference brings us Greta in her own words alongside moving images from her game-changing protests. Collecting her speeches that have made history across the globe, from the United Nations to mass street protests, her book is a rallying cry for why we must all wake up and fight to protect the living planet, no matter how powerless we feel. Our future depends upon it.
Greta Thunberg was born in 2003. In August 2018 she started a school strike that became a movement called Fridays For Future, which has inspired school strikes for climate action in more than 150 countries involving millions of students. Thunberg has spoken at climate rallies across the globe, as well as at the World Economic Forum in Davos, the U.S. Congress, and the United Nations. In 2019, she was named Time’s Person of the Year. Thunberg is vegan, and doesn’t fly, in order to live a low-carbon life.
"Greta Thunberg is already one of our planet’s greatest advocates." —Barack Obama

“When I turned in my book last September, I was skeptical that dramatic political progress on climate change was even possible, since so little had been accomplished over the past few decades. We’re still moving far, far too slowly to avoid climate catastrophe, but Greta Thunberg’s book of speeches—and even more so, her incredibly inspiring turn as global warming’s Joan of Arc, leading millions of protestors into the streets all across the world—made me realize that my own political cynicism is just another form of naivete. And that climate change is much too important to ever give up on.” —David Wallace–Wells, author of The Uninhabitable Earth

“Thunberg has always been refreshingly—and necessarily—blunt in her demands for action from world leaders who refuse to address climate change. With clarity and unbridled passion, she presents her message that climate change is an emergency that must be addressed immediately, and she fills her speeches with punchy sound bites delivered in her characteristic pull-no-punches style . . . . A tiny book . . . with huge potential impact.” —Kirkus, starred review