The Jealousy Man and Other Stories (Paperback) 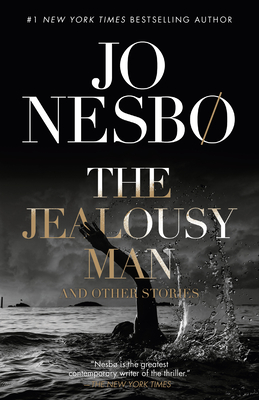 The Jealousy Man and Other Stories (Paperback)


On Our Shelves Now at:
A veritable crime lover’s delight from a true master of mystery and suspense. Experience the #1 New York Times best-selling author as never before in this dark and thrilling short story collection that takes us on a journey of twisted minds and vengeful hearts.

Jo Nesbø is known the world over as a consummate mystery/thriller writer. Famed for his deft characterization, hair-raising suspense and shocking twists, Nesbø’s dexterity with the dark corners of the human heart is on full display in these inventive and enthralling stories.

A detective with a nose for jealousy is on the trail of a man suspected of murdering his twin; a bereaved father must decide whether vengeance has a place in the new world order after a pandemic brings about the collapse of society; a garbage man fresh off a bender tries to piece together what happened the night before; a hired assassin matches wits against his greatest adversary in a dangerous game for survival; and an instantly electric connection between passengers on a flight to London may spell romance, or something more sinister.

With Nesbø's characteristic gift for outstanding atmosphere and gut-wrenching revelations, The Jealousy Man confirms that he is at the peak of his abilities.
JO NESBØ is a musician, songwriter, economist, and #1 New York Times best-selling author. He has won the Raymond Chandler Award for Lifetime Achievement as well as many other awards. His books have sold 45 million copies worldwide and have been translated into fifty languages. His Harry Hole novels include The Redeemer, The Snowman, The Leopard, Phantom, and most recently Knife, and he is also the author of The Son, Headhunters, Macbeth, and several children's books. He lives in Oslo.
“The twelve tales in this impressive collection from bestseller Nesbø (the Harry Hole series) blend taut suspense with sharply limned characters. . . . Frederick Forsyth fans will be enthralled.”
—Publishers Weekly

“Nesbø is the greatest contemporary writer of the thriller.”
—James Shapiro, The New York Times

“Nesbø’s books have a serious, socially significant heft, as well as a confident (even cocky) narrative stride that is unmatched.”
—Doug Childers, The Richmond Times-Dispatch

“Nesbø writes like an angel. As in Lucifer.”
—Susan Balée, The Philadelphia Inquirer