Authority and Freedom: A Defense of the Arts (Hardcover) 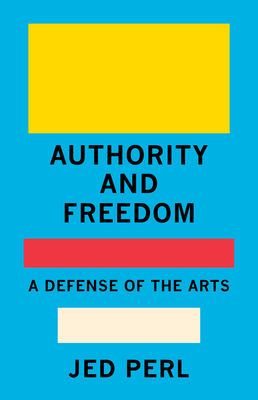 Authority and Freedom: A Defense of the Arts (Hardcover)


On Our Shelves Now at:
From one of our most widely admired art critics comes a bold and timely manifesto reaffirming the independence of all the arts—musical, literary, and visual—and their unique and unparalleled power to excite, disturb, and inspire us.

As people look to the arts to promote a particular ideology, whether radical, liberal, or conservative, Jed Perl argues that the arts have their own laws and logic, which transcend the controversies of any one moment. “Art’s relevance,” he writes, “has everything to do with what many regard as its irrelevance.” Authority and Freedom will find readers from college classrooms to foundation board meetings—wherever the arts are confronting social, political, and economic ferment and heated debates about political correctness and cancel culture.

Perl embraces the work of creative spirits as varied as Mozart, Michelangelo, Jane Austen, Henry James, Picasso, and Aretha Franklin. He contends that the essence of the arts is their ability to free us from fixed definitions and categories. Art is inherently uncategorizable—that’s the key to its importance. Taking his stand with artists and thinkers ranging from W. H. Auden to Hannah Arendt, Perl defends works of art as adventuresome dialogues, simultaneously dispassionate and impassioned. He describes the fundamental sense of vocation—the engagement with the tools and traditions of a medium—that gives artists their purpose and focus. Whether we’re experiencing a poem, a painting, or an opera, it’s the interplay between authority and freedom—what Perl calls “the lifeblood of the arts”—that fuels the imaginative experience. This book will be essential reading for everybody who cares about the future of the arts in a democratic society.

JED PERL is the author of the two-volume biography of Alexander Calder. For twenty years, he was the art critic of The New Republic. His previous books include Magicians & Charlatans, Antoine's Alphabet, and New Art City. He lives in New York City.
"Authority and Freedom puts its argument quietly . . . But it is an essential tract for our time, and no less a prescription for the health of contemporary culture because it eschews stridency and cajoles rather than hectors . . . Jed Perl is one of the most perceptive, most intelligent, and most vigilant art critics writing today . . . [a] brief, timely, understated, but wholly persuasive polemic." —John Banville, The New York Review of Books

"Authority and Freedom is a beautiful essay because it is written with an elegant ease . . . [Jed Perl] draws us back to the origins of our own intellectual situation, and he does so with an argument that is intended to address not just our moment, but the whole of the modern era in the arts. He does it effortlessly, too, and with a conversational air, a man at ease among the millennia, now in conversation with the Egyptian tomb painters, now with Aretha Franklin. Yes, a great and beautiful essay." —Paul Berman, Public Seminar


“A moving and passionate defense of the arts in and for themselves . . . Authority and Freedom’s argument for the intrinsic value of art leaves readers with questions to ponder. This may be the result of Perl’s inviting and creative combinations of memoir and learned analysis, which naturally elicit personal reflection, and arguments possibly left unfinished.” —Daniel Lelchuk, The Bulwark
“Reads like a free-range cornucopia of revelatory encounters Perl has had with books, poetry, music, painting, sculpture, architecture, film and dance. He radiates sheer pleasure with his very personal responses to art of all kinds, writing with warmth and a sense of gratitude for the many peak experiences he’s had from a lifetime of engagement. Although he’s best known for his critical essays on painting and sculpture—Perl was for years art columnist for The New Republic—he is an omnivore of all media.” —John Adams, The New York Times Book Review

“Perl, a storied art critic and the author of a magisterial two-volume biography of Alexander Calder among much else, has written an astute analysis of the conditions that make art possible. Having established that, he proceeds to an argument for their preservation. Along the way he reveals that the current vogue for relevance repeats errors that crop up regularly in human history.” —Franklin Einspruch, Quillette

"[A] measured but emphatic case for art for art’s sake [and] a penetrating look at the long-simmering tension between the yen for artistic freedom and the pressure to create a work of social value.” —Shelf Awareness

“[A] passionate and cerebral work . . . Draws a line from the past to the conundrum at hand today . . . A thought-provoking exploration into the limits and liberation that art can impose and unlock. Creatives in any field should give this a serious look.” —Publishers Weekly

“A wide-ranging study of the nature and meaning of artistic creation [examining] the tension between the ‘ordering impulse’ of authority and the freedom to experiment and play . . . A thoughtful meditation on the transcendence of art.” —Kirkus Reviews

“A powerful argument against the politicization and trivialization of the arts. Jed Perl reminds us how much we need artists to illuminate our experience and help us understand our world.” —Anne Applebaum, author of Twilight of Democracy

“In his commanding reflections, Jed Perl illumines and resolves the riddle of contradiction through a credo of linked opposites: authority and freedom. Michelangelo adheres to the ancient architectural tenets of Vitruvius while at the same time dazzling with innovation. Aretha Franklin is heir to the rhythmic old framework of Gospel singing, yet distills from it tones and concentrations of her own. How forerunner genius collaborates with newborn genius is the lambent theme of Authority and Freedom. Taking his turn in the long, long chronicle of art criticism, Perl stands today as our generation’s most masterly re-maker of genius.” —Cynthia Ozick, author of Antiquities and The Puttermesser Papers

“Jed Perl makes a persuasive argument for a kind of ‘middle way’ in the arts, one that is neither strictly formalist nor identitarian. Perl wants us to pay close attention to how works of art are actually made, and he outlines the ways in which artists of widely divergent temperaments, backgrounds, and histories engage with, or against, the material forms of their disciplines.” —David Salle, painter and author of How to See

“Jed Perl argues persuasively, passionately, and beautifully that ‘art for art’s sake’ is art for everyone’s sake—for everything’s sake. Our cultural and political future depend on it. Authority and Freedom is a crucial avatar of the liberal spirit—and an insatiable polemic of democratic love.” —Joshua Cohen, author of Book of Numbers and The Netanyahus

“This is a book about the creativity of artists and the discipline of art. Jed Perl’s beautiful account of the ‘making’ of novels, plays, paintings, concertos, songs, and performances of all sorts, is a tribute to the makers. But it isn’t written for them. It is written for the rest of us, who read, listen, look, and watch, and its achievement is, as Auden wrote, ‘to teach the free man how to praise’ (the free woman, too).” —Michael Walzer, author of Just and Unjust Wars