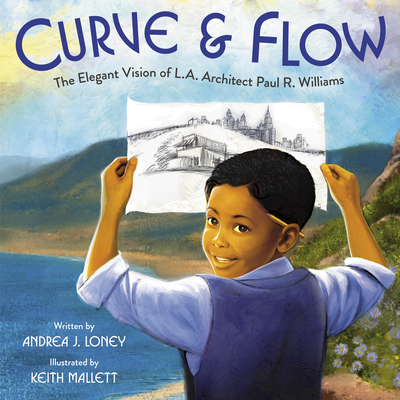 
On Our Shelves Now at:
Discover the remarkable story of an orphaned Black boy who grew up to become the groundbreaking architect to the stars, Paul R. Williams. A stunning nonfiction picture-book biography from the Caldecott Honor–winning author and NAACP Image Award–nominated artist.

As an orphaned Black boy growing up in America in the early 1900s, Paul R. Williams became obsessed by the concept of "home." He not only dreamed of building his own home, he turned his dreams into drawings. Defying the odds and breaking down the wall of racism, Williams was able to curve around the obstacles in his way to become a world-renowned architect. He designed homes for the biggest celebrities of the day, such as Frank Sinatra and Lucille Ball, and created a number of buildings in Los Angeles that are now considered landmarks.

Keith Mallett has been drawing and painting for as long as he can remember. The NAACP Image Award–nominated artist and designer has created posters and fine art prints for more than forty years. In 2017, he created the Google Doodle commemorating Martin Luther King Jr. Day. He has illustrated a number of picture books, including When Langston Dances (written by Kaija Langley), Take a Picture of Me, James VanDerZee! (written by Andrea J. Loney), and Sing a Song (written by Kelly Starling Lyons). Keith lives in San Diego with his wife and German shepherd.
★ "An accomplished and uplifting biography of a Black man who "created more than 3,000 structures around the world" and is integral to the history of Los Angeles." —Shelf Awareness, starred review

★ "An inspiring tribute to a determined dreamer and doer constructed with admirable verve." —Kirkus, starred review

"The illustrations reinforce [the] theme of overcoming adversity. They convey grace, warmth, and dignity with a color palette dominated by purple and gold, blue and brown and burgundy, and expressive figures who fairly shine and glow." —Horn Book