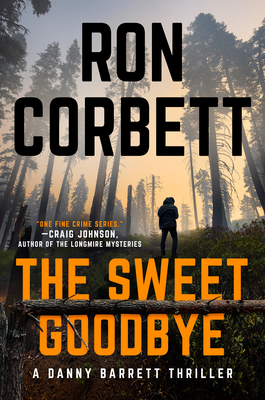 
On Our Shelves Now at:
In this thrilling new series from Edgar®-nominated author Ron Corbett, the most dangerous predator in the Maine wilderness walks on two feet—and it is Danny Barrett's job to bring him down.

Something is not right in the North Maine Woods.

A small family-run lumber company should not have more than two hundred million unaccountable dollars on their books. Money like that comes from moving something other than wood across the border.

The first agent the FBI sent undercover was their best man—sure to get the answers that were needed. He was dead within a month.

Now, Danny Barrett is taking his place. Before he was a cop, Danny grew up in the woods of Northern Michigan. He is the only chance the feds have of getting answers, but how many more will have to die first?
Ron Corbett is a writer, journalist, broadcaster, and cofounder of Ottawa Press and Publishing.  A lifelong resident of Ottawa, Ron’s writing has won numerous awards, including two National Newspaper Awards. He has been a full-time columnist with both the Ottawa Citizen and the Ottawa Sun. He is the author of seven nonfiction books, including Canadian bestseller The Last Guide and the critically acclaimed First Soldiers Down, about Canada’s military deployment to Afghanistan. The first book in his Frank Yakabuski mystery series was nominated for the Best Paperback Original Edgar® Award.
“Ron Corbett’s dynamite new series debut…has a snappy voice, the action is perfectly paced...And it brims with heart and grit, always a winning combination.”
—New York Times Book Review

“If you crave an action-and-adventure-packed summer survival tale, this one’s for you.”
—The Boston Globe

“Like a marvelous piece of north country wood, The Sweet Goodbye has a luxurious grain and finish—not to say that Ron Corbett’s debut novel of FBI Agent Danny Barrett doesn’t have its share of warp and twists. This is the plank that’s going to set the platform for one fine crime series.”
—Craig Johnson, author of the Walt Longmire Mysteries

“Small town secrets and big time corruption. The Sweet Goodbye is a throwback to the days of moody, flawed heroes and fun, complex bad guys. Compelling classic noir that plays out in a forgotten America.”
—Ace Atkins, New York Times bestselling author of The Heathens and Robert B. Parker’s Bye Bye Baby.

“From the opening line Corbett makes Barrett a distinctive figure, nuanced enough to carry multiple sequels, and goes on to humanize even some of the bad guys, no mean feat. Vivid and detailed descriptions of the Maine woods enhance the intricate plot."
—Publishers Weekly (starred review)