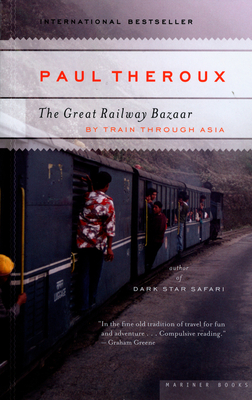 
On Our Shelves Now at:
From legendary writer Paul Theroux, an epic journey across Europe and Asia in this international best-selling classic of travel literature: “Funny, sardonic, wonderfully sensuous and evocative…consistently entertaining."—New York Times Book Review

In 1973, Paul Theroux embarked on a four-month journey by train from the United Kingdom through Europe, the Middle East, and Southeast Asia. In The Great Railway Bazaar, he records in vivid detail and penetrating insight the many fascinating incidents, adventures, and encounters of his grand, intercontinental tour.

Asia's fabled trains—the Orient Express, the Khyber Pass Local, the Frontier Mail, the Golden Arrow to Kuala Lumpur, the Mandalay Express, the Trans-Siberian Express—are the stars of a journey that takes Theroux on a loop eastbound from London's Victoria Station to Tokyo Central, then back from Japan on the Trans-Siberian. Brimming with Theroux's signature humor and wry observations, this engrossing chronicle is essential reading for both the ardent adventurer and the armchair traveler.
PAUL THEROUX is the author of many highly acclaimed books. His novels include The Lower River, Jungle Lovers, and The Mosquito Coast, and his renowned travel books include Ghost Train to the Eastern Star and Dark Star Safari. He lives in Hawaii and on Cape Cod.

It’s as if Graham Greene and Joseph Conrad decided to rewrite Baedeker’s guides to Asia…[a] great read.”—Newsweek   “Wonderful…full of zest and adventure.”—Washington Post   “A travel book of the first magnitude.”—Business Week    —