The Things They Carried (Paperback) 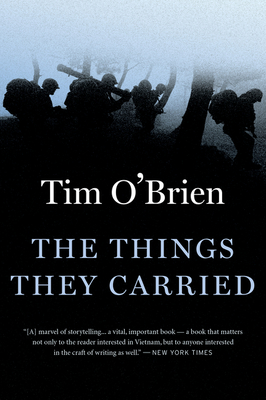 The Things They Carried (Paperback)


On Our Shelves Now at:
“O'Brien has written a vital, important book—a book that matters not only to the reader interested in Vietnam, but to anyone interested in the craft of writing as well.”—Michiko Kakutani, New York Times

A classic work of American literature that has not stopped changing minds and lives since it burst onto the literary scene, The Things They Carried is a ground-breaking meditation on war, memory, imagination, and the redemptive power of storytelling.

The Things They Carried depicts the men of Alpha Company: Jimmy Cross, Henry Dobbins, Rat Kiley, Mitchell Sanders, Norman Bowker, Kiowa, and the character Tim O’Brien, who has survived his tour in Vietnam to become a father and writer at the age of forty-three.

Taught everywhere—from high school classrooms to graduate seminars in creative writing—it has become required reading for any American and continues to challenge readers in their perceptions of fact and fiction, war and peace, courage and fear and longing. The Things They Carried won France's prestigious Prix du Meilleur Livre Etranger and the Chicago Tribune Heartland Prize; it was also a finalist for the Pulitzer Prize and the National Book Critics Circle Award.

TIM O’BRIEN received the 1979 National Book Award for Going After Cacciato. Among his other books are The Things They Carried, Pulitzer Finalist and a New York Times Book of the Century, and In the Lake of the Woods, winner of the James Fenimore Cooper Prize. He was awarded the Pritzker Literature Award for lifetime achievement in military writing in 2013.

“The best of these stories—and none is written with less than the sharp edge of honed vision—are memory and prophecy. These tell us not where we were but where we are, and perhaps where we will be. . . . It is an ultimate, indelible image of war in our time, and in time to come.” —Los Angeles Times “In prose that combines the sharp, unsentimental rhythms of Hemingway with gentler, more lyrical descriptions, Mr. O'Brien gives the reader a shockingly visceral sense of what it felt like to tramp through a booby-trapped jungle, carrying 20 pounds of supplies, 14 pounds of ammunition, along with radios, machine guns, assault rifles and grenades. . . . With The Things They Carried, Mr. O'Brien has written a vital, important book—a book that matters not only to the reader interested in Vietnam, but to anyone interested in the craft of writing as well.” —Michiko Kakutani, New York Times “Belongs high on the list of best fiction about any war . . . crystallizes the Vietnam experience for everyone [and] exposes the nature of all war stories.” —New York Times, “Books of the Century” “With The Things They Carried, Tim O'Brien adds his second title to the short list of essential fiction about Vietnam. . . . [H]e captures the war's pulsating rhythms and nerve-racking dangers. But he goes much further. By moving beyond the horror of the fighting to examine with sensitivity and insight the nature of courage and fear, by questioning the role that imagination plays in helping to form our memories and our own versions of truth, he places The Things They Carried high up on the list of best fiction about any war.”  —New York Times Book Review “When Going After Cacciato appeared out of nowhere to win the 1979 National Book Award, it seemed to many, myself included, that no finer fiction had, as of then, been written in the closing half of the 20th century—or was likely to be in the remaining years to come. The Things They Carried disposes of that prediction . . . Tim O'Brien is the best American writer of his generation.”  —San Francisco Examiner “The integrity of a novel and the immediacy of an autobiography . . . O’Brien’s absorbing narrative moves in circles; events are recalled and retold again and again, giving us a deep sense of the fluidity of truth and the dance of memory.” —The New Yorker “Rendered with an evocative, quiet precision, not equaled in the imaginative literature of the American war in Vietnam. It is as though a Thucydides had descended from grand politique and strategy to calm dissection of the quotidian efforts of war. . . . O'Brien has it just right.”  —Washington Post “Powerful . . . Composed in the same lean, vigorous style as his earlier books, The Things They Carried adds up to a captivating account of the experiences of an infantry company in Vietnam. . . . Evocative and haunting, the raw force of confession.” —Wall Street Journal “O'Brien has written a book so searing and immediate you can almost hear the choppers in the background. Drenched in irony and purple-haze napalm, the Vietnam narrative has almost been forced to produce a new kind of war literature. The Things They Carried is an extraordinary contribution to that class of fiction. . . . O'Brien's passion and memory may have been his torment all these years, but they have also been his gift. . . . The Things They Carried leaves third-degree burns. Between its rhythmic brilliance and its exquisite rendering of memory--the slan
— No Source