Varqá and Rúhu'lláh: 101 Stories of Bravery on the Move (Paperback) 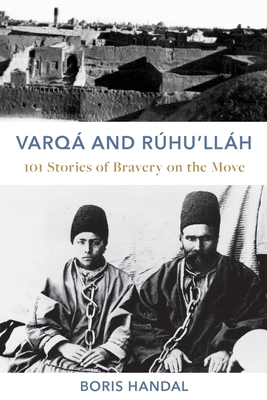 Varqá and Rúhu'lláh: 101 Stories of Bravery on the Move (Paperback)

Varq and R ḥu'll h: 101 Stories of Bravery on the Move is the extraordinary story of a father and a son that arose in the 19th century to spread the Faith of Bah 'u'll h throughout Iran with indomitable strength and resilience. Varq the father, a physician and a talented poet, and his gifted adolescent son R ḥu'll h, both of penetrating spiritual insight, took the New Gospel with zeal and courage to a generation blind in the most dire fanaticism.

Operating in the midst of a country sunk into corruption and bigotry, Varq and R ḥu'll h were able to teach both the rich and the poor, the prince and the commoner, the scholar and the illiterate, the believer and the laic, in freedom or in prison. Their saga ended with their tragic martyrdom in the royal prison of Tehran in 1896 but has continued to live like a legend inspiring Bah ''s around the world to serve.

﻿Varq 's legacy of service and consecration was continued by Val yu'll h Varq and Dr 'Al -Muḥammad Varq , his son and grandson, respectively, all three of whom were designated as Hands of the Cause of God.