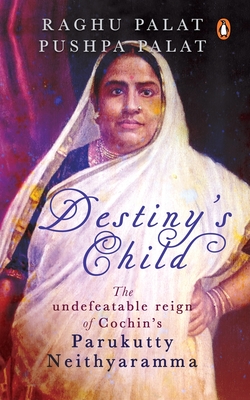 This is an intimate account of the extraordinary life of Parukutty Nethyaramma, who went on to become one of the most powerful rulers of the Kingdom of Cochin.

At the tender age of fourteen, her marriage thrust her into a hostile world. Taking on her detractors, Parukutty stubbornly and fearlessly forged ahead to become a voice none could gainsay. Despite a seventeen-year age gap, she had built a special, unshakable bond with her husband. When he was crowned the sovereign ruler of Cochin, she vowed to support and protect his position throughout her life. Theirs was an enviable partnership of two incredible equals who together went on to break many traditional norms. At a time when women were relegated to the shadows, Parukutty travelled with her husband, participated in important discussions, and even went on to rule as his proxy. She became a force to be reckoned with in her own right.

Unafraid to break norms, she often floated radical reforms that, though lauded by the citizens, riled the conservative and powerful elite. Parukutty deployed her sharp wit, acumen and diplomacy to stand up to a host of adversaries and naysayers, including the British, who choreographed intricate manoeuvres to overthrow the royal family.

Narrated by Parukutty's own great-grandson and his wife, Raghu and Pushpa Palat, this deeply personal chronicle paints a vivid picture of a woefully understated icon from the twentieth century.

A banker by profession Raghu Palat has been pursuing his passion for writing since 1982. He has over 45 published books on banking, finance and taxation to his credit and has penned innumerable articles for newspapers and periodicals. Though remaining active in his professional capacity as an independent director on the boards of Union Asset Management Company Private Ltd. and Pritish Nandy Ltd. and heading his own financial consultancy firm, Raghu's fervor for writing continues unabated.

Pushpa Palat has been a writer for four decades having written for the Times of India, Economic Times, Destination Traveller, foreign travel trade newspapers and several online and print periodical and journals. Her writing has covered an eclectic and diverse range of subjects that vary from luxury and lifestyle to self-help and text books.

These two writers who write on divergent genres, in differing styles with individual perspectives have in recent years pooled their talents to venture into yet another genre - history.
Their first historical novel 'The Case that Shook the Empire' was published in 2019 and is currently being made into a film by Karan Johar's production house Dharma Dharma Productions Private Ltd.

Destiny's Child, their second historical novel is the riveting life story of Parukutty Neitiaramma, the consort of the Maharaja of Cochin. It is a biographical account recounted by Raghu Palat, the great grandson of the Maharaja and Parukutty, and his wife Pushpa Palat. The narrative is unique in that the authors have known intimately many of the persons featured in the book including the protagonist - Parukutty Neitiyaramma.

Destiny's Child is the story of Parukutty the consort of Maharaja Rama Varma XVI - a woman of indomitable spirit and immense courage.