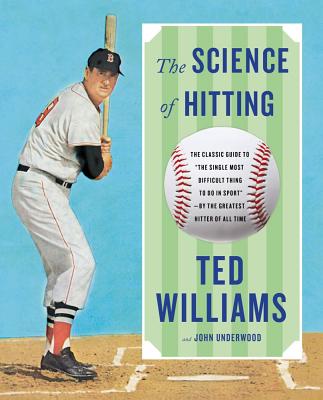 
On Our Shelves Now at:
“Baseball’s last .400 hitter share[s] his secrets in this primer still used at all levels of the game.” —Paul Dickson, author of Bill Veeck: Baseball’s Greatest Maverick

Now fully revised with new illustrations and diagrams, the classic—and still the greatest—book on hitting from the last baseball player to break the magic .400 barrier, Ted Williams.

Ted Williams was arguably the greatest pure hitter who ever lived. A lifelong student of hitting, he sought advice from every great hitter—and pitcher—he met. Drawing on that advice, as well as his own legendary life in baseball, Williams produced the all-time batting classic, The Science of Hitting. Using its detailed illustrations, anecdotes, and concise coaching, players of all skill levels will learn how to improve their fundamentals and gain keen insights into the finer points of hitting, including:

The Science of Hitting is a must-read for all baseball players looking to improve their turn at bat and for all coaches and parents teaching the sport.
Ted Williams won the American League batting championship six times and was given a place in the Baseball Hall of Fame in 1966. He was the last man to bat .400 in major league baseball and has been considered America’s leading sports fisherman. With John Underwood, he coauthored Fishing “The Big Three” and his autobiography, My Turn at Bat.
Wade Boggs American League batting champion A major influence on my basic hitting skills through my formative years and a must for learning and knowing the strike zone.