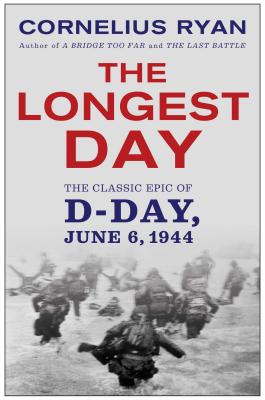 
On Our Shelves Now at:
The unparalleled, classic work of history that recreates the battle that changed World War II—the Allied invasion of Normandy.

The Longest Day is Cornelius Ryan’s unsurpassed account of D-Day, a book that endures as a masterpiece of military history. In this compelling tale of courage and heroism, glory and tragedy, Ryan painstakingly recreates the fateful hours that preceded and followed the massive invasion of Normandy to retell the story of an epic battle that would turn the tide against world fascism and free Europe from the grip of Nazi Germany.

This book, first published in 1959, is a must for anyone who loves history, as well as for anyone who wants to better understand how free nations prevailed at a time when darkness enshrouded the earth.
Cornelius Ryan was born in 1920 in Dublin, Ireland, where he was raised. He became one of the preeminent war correspondents of his time, flying fourteen bombing missions with the Eighth and Ninth US Air Forces and covering the D-Day landings and the advance of General Patton’s Third Army across France and Germany. After the end of hostilities in Europe, he covered the Pacific War. In addition to his classic works The Longest Day, The Last Battle, and A Bridge Too Far, he is the author of numerous other books, which have appeared throughout the world in nineteen languages. Awarded the Legion of Honor by the French government in 1973, Mr. Ryan was hailed at that time by Malcolm Muggeridge as “perhaps the most brilliant reporter now alive.” He died in 1976.
"A dramatic, moving masterpiece, a living memorial to the men who died and as suspenseful as the most gripping mystery story." -- J. H. Thompson, Chicago Sunday Tribune

"Fifty years from now, the history of D-Day, I am sure, will lean heavily on this book." -- John Toland, The New York Times Book Review

"If you have read all the accounts of D-Day or none of them, if you were in the fighting or on the sidelines, you will be spellbound, as I was, by this magnificent retelling of a glorious and tragic story." -- Lt. Gen. James Gavin