Thirteen Ways to Steal a Bicycle: Theft Law in the Information Age (Hardcover) 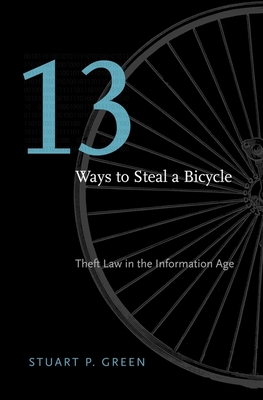 Thirteen Ways to Steal a Bicycle: Theft Law in the Information Age (Hardcover)

Theft claims more victims and causes greater economic injury than any other criminal offense. Yet theft law is enigmatic, and fundamental questions about what should count as stealing remain unresolved--especially misappropriations of intellectual property, information, ideas, identities, and virtual property.

In Thirteen Ways to Steal a Bicycle, Stuart Green assesses our current legal framework at a time when our economy increasingly commodifies intangibles and when the means of committing theft and fraud grow ever more sophisticated. Was it theft for the editor of a technology blog to buy a prototype iPhone he allegedly knew had been lost by an Apple engineer in a Silicon Valley bar? Was it theft for doctors to use a patient's tissue without permission in order to harvest a valuable cell line? For an Internet activist to publish tens of thousands of State Department documents on his Web site? In this full-scale critique, Green reveals that the last major reforms in Anglophone theft law, which took place almost fifty years ago, flattened moral distinctions, so that the same punishments are now assigned to vastly different offenses. Unreflective of community attitudes toward theft, which favor gradations in blameworthiness according to what is stolen and under what circumstances, and uninfluenced by advancements in criminal law theory, theft law cries out for another reformation--and soon.
Stuart P Green is Professor of Law and Justice Nathan L. Jacobs Scholar at Rutgers School of Law, Newark.