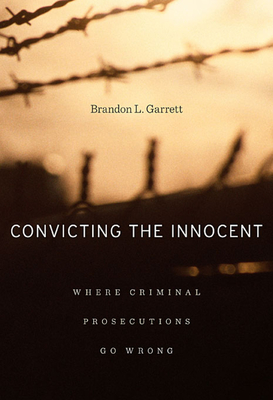 On January 20, 1984, Earl Washington--defended for all of forty minutes by a lawyer who had never tried a death penalty case--was found guilty of rape and murder in the state of Virginia and sentenced to death. After nine years on death row, DNA testing cast doubt on his conviction and saved his life. However, he spent another eight years in prison before more sophisticated DNA technology proved his innocence and convicted the guilty man.

DNA exonerations have shattered confidence in the criminal justice system by exposing how often we have convicted the innocent and let the guilty walk free. In this unsettling in-depth analysis, Brandon Garrett examines what went wrong in the cases of the first 250 wrongfully convicted people to be exonerated by DNA testing. Based on trial transcripts, Garrett's investigation into the causes of wrongful convictions reveals larger patterns of incompetence, abuse, and error. Evidence corrupted by suggestive eyewitness procedures, coercive interrogations, unsound and unreliable forensics, shoddy investigative practices, cognitive bias, and poor lawyering illustrates the weaknesses built into our current criminal justice system. Garrett proposes practical reforms that rely more on documented, recorded, and audited evidence, and less on fallible human memory. Very few crimes committed in the United States involve biological evidence that can be tested using DNA. How many unjust convictions are there that we will never discover? Convicting the Innocent makes a powerful case for systemic reforms to improve the accuracy of all criminal cases.
Brandon L. Garrett is Professor of Law at the University of Virginia School of Law.