Capitalism, Alone: The Future of the System That Rules the World (Paperback) 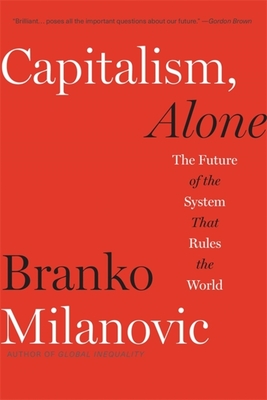 Capitalism, Alone: The Future of the System That Rules the World (Paperback)

"Brilliant...Poses all the important questions about our future."
--Gordon Brown "A scholar of inequality warns that while capitalism may have seen off rival economic systems, the survival of liberal democracies is anything but assured."
--The Economist We are all capitalists now. For the first time in human history, the world is dominated by one economic system. At some level capitalism has triumphed because it works: it delivers prosperity and gratifies our desire for autonomy. But this comes at a moral price, pushing us to treat material success as the ultimate goal, and offers no guarantee of stability. While Western liberal capitalism creaks under the strains of inequality and excess, some are flaunting the virtues of political capitalism, exemplified by China, which may be more efficient, but is also vulnerable to corruption and social unrest. One of the outstanding economists of his generation, Branko Milanovic mines the data to tell his ambitious and compelling story. Capitalism gets a lot wrong, he argues, but also much right--and it isn't going away anytime soon. Our task is to improve it in the hopes that a more equitable capitalism can take hold. "Erudite, illuminating...Engaging to read...As a virtuoso economist, Milanovic is superb when he is compiling and assessing data."
--Robert Kuttner, New York Review of Books "Leaves little doubt that the social contract no longer holds. Whether you live in Beijing or New York, the time for renegotiation is approaching."
--Edward Luce, Financial Times