Why Do We Still Have the Electoral College? (Paperback) 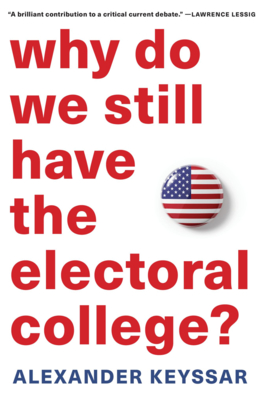 Why Do We Still Have the Electoral College? (Paperback)

A New Statesman Book of the Year

"America's greatest historian of democracy now offers an extraordinary history of the most bizarre aspect of our representative democracy--the electoral college...A brilliant contribution to a critical current debate."
--Lawrence Lessig, author of They Don't Represent Us Every four years, millions of Americans wonder why they choose their presidents through an arcane institution that permits the loser of the popular vote to become president and narrows campaigns to swing states. Congress has tried on many occasions to alter or scuttle the Electoral College, and in this master class in American political history, a renowned Harvard professor explains its confounding persistence. After tracing the tangled origins of the Electoral College back to the Constitutional Convention, Alexander Keyssar outlines the constant stream of efforts since then to abolish or reform it. Why have they all failed? The complexity of the design and partisan one-upmanship have a lot to do with it, as do the difficulty of passing constitutional amendments and the South's long history of restrictive voting laws. By revealing the reasons for past failures and showing how close we've come to abolishing the Electoral College, Keyssar offers encouragement to those hoping for change. "Conclusively demonstrates the absurdity of preserving an institution that has been so contentious throughout U.S. history and has not infrequently produced results that defied the popular will."
--Michael Kazin, The Nation "Rigorous and highly readable...shows how the electoral college has endured despite being reviled by statesmen from James Madison, Thomas Jefferson, and Andrew Jackson to Edward Kennedy, Bob Dole, and Gerald Ford."
--Lawrence Douglas, Times Literary Supplement