The Emperor: Downfall of an Autocrat (Vintage International) (Paperback) 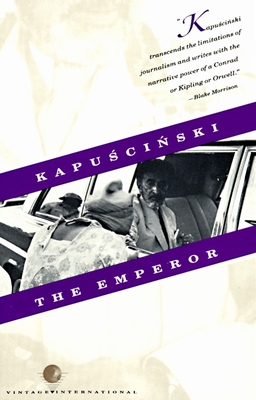 The Emperor: Downfall of an Autocrat (Vintage International) (Paperback)

A "sensitive, powerful ... history" (The New York Review of Books) of a man living amidst nearly unimaginable pomp and luxury while his people teetered netween hunger and starvation.

Haile Selassie, King of Kings, Elect of God, Lion of Judah, His Most Puissant Majesty and Distinguished Highness the Emperor of Ethiopia, reigned from 1930 until he was overthrown by the army in 1974. While the fighting still raged, Ryszard Kapuscinski, Poland's leading foreign correspondent, traveled to Ethiopia to seek out and interview Selassie's servants and closest associates on how the Emperor had ruled and why he fell. This is Kapuscinski's rendition of their accounts—humorous, frightening, sad, groteque.

Ryszard Kapuscinski, Poland’s most celebrated foreign correspondent, was born in 1932 in Pinsk (in what is now Belarus) and spent four decades reporting on Asia, Latin America, and Africa. He is also the author of Imperium, Another Day of Life, and The Soccer War. His books have been translated into 28 languages. Kapuscinski died in 2007.
"[The Emperor] transcends reportage, becoming a nightmare of power... An unforgettable, fiercely comic, and finally compassionate book."
—Salman Rushdie

"Kapuscinski transcends the limitations of journalism and writes with the narrative power of a Conrad or Kipling or Orwell."
—Blake Morrison

"A Stunning exhibit; the interviewed subjects. . .enunciate their memories of the days of Haile Selassie with a magical elegance that. . .achieves poetry and aphorism."
—John Updike, The New Yorker