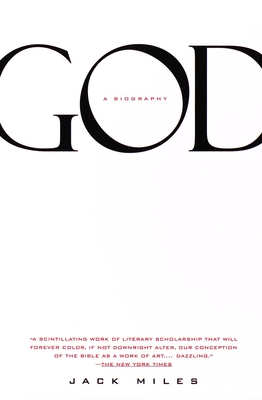 What sort of "person" is God? What is his "life story"? Is it possible to approach him not as an object of religious reverence, but as the protagonist of the world's greatest book—as a character who possesses all the depths, contradictions, and abiguities of a Hamlet? This is the task that Jack Miles—a former Jesuit trained in religious studies and Near Eastern languages—accomplishes with such brilliance and originality in God: A Biography.

Using the Hebrew Bible as his text, Miles shows us a God who evolves through his relationship with man, the image who in time becomes his rival. Here is the Creator who nearly destroys his chief creation; the bloodthirsty warrior and the protector of the downtrodden; the lawless law-giver; the scourge and the penitent. Profoundly learned, stylishly written, the resulting work illuminates God and man alike and returns us to the Bible with a sense of discovery and wonder.
Jack Miles is a writer whose work has appeared in numerous national publications, including The Atlantic Monthly, the The New York Times, The Boston Globe, The Washington Post, and the Los Angeles Times, where he served for ten years as literary editor and as a member of the newspaper’s editorial board. The recipient of a Ph.D. in Near Eastern languages from Harvard University and a former Jesuit, he has been a Regents Lecturer at the University of California, director of the Humanities Center at Claremont Graduate University, and visiting professor of humanities at the California Institute of Technology. His first book, God: A Biography, won a Pulitzer Prize and has been translated into fifteen languages. Currently senior advisor to the president of the J. Paul Getty Trust, a foundation supporting art and scholarship, Dr. Miles lives with his wife and daughter in Southern California.