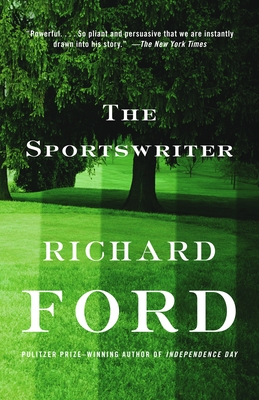 This is book number 1 in the Bascombe Trilogy series.

As a sportswriter, Frank Bascombe makes his living studying people--men, mostly--who live entirely within themselves. This is a condition that Frank himself aspires to. But at thirty-eight, he suffers from incurable dreaminess, occasional pounding of the heart, and the not-too-distant losses of a career, a son, and a marriage. In the course of the Easter week in which Ford's moving novel transpires, Bascombe will end up losing the remnants of his familiar life, though with his spirits soaring.
The author of five novels and two collections of stories, Richard Ford was awarded the Pulitzer Prize and the PEN/Faulkner Award for Independence Day, the first book to win both prizes. In 2001, he received the PEN/Malamud Award for excellence in short fiction. Ford is the author of the Bascombe novels, which include The Sportswriter and its sequels, Independence Day and The Lay of the Land.  He lives in Boothbay, Maine.