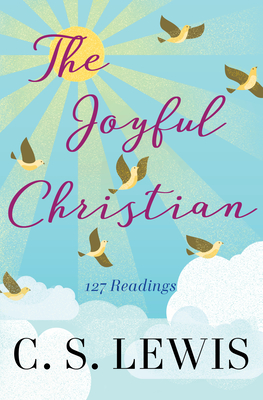 
Not On Our Shelves—Ships in 1-5 Days
C.S. Lewis, himself a convert, wrote of being "surprised by joy" when he discovered his belief in Jesus Christ. In these 127 devotional readings, selected from Lewis's many works on faith and spirituality, Christians everywhere can share in the joy of this master theologian as he discusses topics ranging from the nature of prayer and good works to psychoanalysis and fascism. In The Joyful Christian, Lewis offers inspiration for all those who hunger and thirst after joy.
C.S. Lewis was a professor of medieval and Renaissance literature at Oxford and Cambridge universities who wrote more than thirty books in his lifetime, including The Screwtape Letters, The Chronicles of Narnia, and Mere Christianity. He died in 1963.
America The Joyful Christian gives as good an introduction to the breadth and depth of Lewis's religious reflections as you are likely to find between two covers.

Christianity Today The most welcome general book in the field of theology. Excellent for both those who have long appreciated Lewis and those who need an introduction.