Ladies And Gentlemen Of The Jury: Greatest Closing Arguments In Modern Law (Paperback) 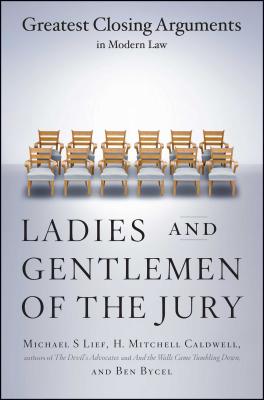 Ladies And Gentlemen Of The Jury: Greatest Closing Arguments In Modern Law (Paperback)


Not On Our Shelves—Ships in 1-5 Days
The closing arguments from ten noteworthy cases—“lawyers and nonlawyers will enjoy the passion and eloquence of these counselors; practitioners of law will find much to learn from them” (Los Angeles Times Book Review).

Until now, only the twelve jurors who sat in judgment were able to appreciate these virtuoso performances, where weeks of testimony were boiled down and presented with flair, wit, and high drama. For five years the authors researched every archive, and readers can now lose themselves in the summations of America’s finest litigators.

Clarence Darrow saves Leopold and Loeb from the gallows in the Roaring Twenties. Gerry Spence takes on the nuclear power industry for the death of Karen Silkwood in a modern-day David and Goliath struggle. Vincent Bugliosi squares off against the madness of Charles Manson and his murderous “family” in the aftermath of their bloody spree. Clara Foltz, the first woman to practice law in California, argues passionately to an all-male jury, defending her place in the courtroom. Bobby DeLaughter brings the killer of civil-rights leader Medgar Evers to justice after thirty years and two mistrials. Aubrey Daniel brings Lt. William Calley, Jr., to justice for the My Lai massacre. William Kunstler challenges the establishment after the 1968 Chicago riots in his defense of yippie leaders known as the Chicago Seven.

Each closing argument is put into context by the authors, who provide historical background, a brief biography of each attorney, and commentary, pointing out the trial tactics used to great effect by the lawyers, all in accessible, reader-friendly language.
Michael S Lief is a senior deputy district attorney in Ventura, California. A former newspaper editor, he was a submarine driver for the U. S. Navy during the Cold War.

H. Mitchell Caldwell is a professor at Pepperdine University School of Law. A former deputy district attorney, he specializes in death-penalty litigation before the California Supreme Court.
Don Franzen Los Angeles Times Book Review Lawyers and nonlawyers will enjoy the passion and eloquence of these counselors; practitioners of law will find much to learn from them.

Henry G. Miller New York Law Journal As much about history as advocacy.

Bruce D. Brown Legal Times What makes Ladies and Gentlemen of the Jury enjoyable, in the end, is the variety of styles in the volume -- Spence's chatty informality; Darrow's use of the rhetorical question; Kunstler's blunt spoken tongue; Jackson's awesome solemnity....The flavor of the times comes through in the voices in the courtroom.

Richard Roberts The Indianapolis Star The majesty of the law stands tall in this presentation of the powerful closing arguments in ten of the most dramatic and eventful trials of modern times....Relatively few people were present for their original delivery. Now anyone can revisit them.