The End of Ambition: The United States and the Third World in the Vietnam Era (America in the World #46) (Hardcover) 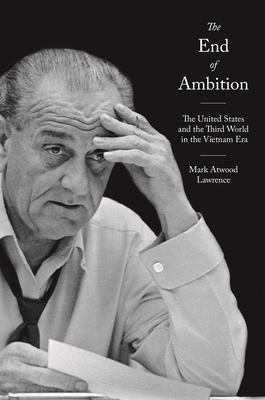 The End of Ambition: The United States and the Third World in the Vietnam Era (America in the World #46) (Hardcover)

A groundbreaking new history of how the Vietnam War thwarted U.S. liberal ambitions in the developing world and at home in the 1960s

At the start of the 1960s, John F. Kennedy and other American liberals expressed boundless optimism about the ability of the United States to promote democracy and development in Asia, Africa, the Middle East, and Latin America. With U.S. power, resources, and expertise, almost anything seemed possible in the countries of the Cold War's "Third World"--developing, postcolonial nations unaligned with the United States or Soviet Union. Yet by the end of the decade, this vision lay in ruins. What happened? In The End of Ambition, Mark Atwood Lawrence offers a groundbreaking new history of America's most consequential decade. He reveals how the Vietnam War, combined with dizzying social and political changes in the United States, led to a collapse of American liberal ambition in the Third World--and how this transformation was connected to shrinking aspirations back home in America. By the middle and late 1960s, democracy had given way to dictatorship in many Third World countries, while poverty and inequality remained pervasive. As America's costly war in Vietnam dragged on and as the Kennedy years gave way to the administrations of Lyndon B. Johnson and Richard M. Nixon, America became increasingly risk averse and embraced a new policy of promoting mere stability in the Third World. Paying special attention to the U.S. relationships with Brazil, India, Iran, Indonesia, and southern Africa, The End of Ambition tells the story of this momentous change and of how international and U.S. events intertwined. The result is an original new perspective on a war that continues to haunt U.S. foreign policy today.
Mark Atwood Lawrence teaches history at the University of Texas at Austin. He is the author of Assuming the Burden: Europe and the American Commitment to War in Vietnam and The Vietnam War: A Concise International History.