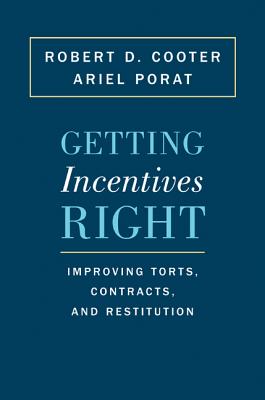 How tort, contract, and restitution law can be reformed to better serve the social good

Lawyers, judges, and scholars have long debated whether incentives in tort, contract, and restitution law effectively promote the welfare of society. If these incentives were ideal, tort law would reduce the cost and frequency of accidents, contract law would lubricate transactions, and restitution law would encourage people to benefit others. Unfortunately, the incentives in these laws lead to too many injuries, too little contractual cooperation, and too few unrequested benefits. Getting Incentives Right explains how law might better serve the social good. In tort law, Robert Cooter and Ariel Porat propose that all foreseeable risks should be included when setting standards of care and awarding damages. Failure to do so causes accidents that better legal incentives would avoid. In contract law, they show that making a promise often causes the person who receives it to change behavior and undermine the cooperation between the parties. They recommend several solutions, including a novel contract called "anti-insurance." In restitution law, people who convey unrequested benefits to others are seldom entitled to compensation. Restitution law should compensate them more than it currently does, so that they will provide more unrequested benefits. In these three areas of law, Getting Incentives Right demonstrates that better law can promote the well-being of people by providing better incentives for the private regulation of conduct.
Robert D. Cooter is the Herman F. Selvin Professor of Law at the University of California, Berkeley. His books include Solomon's Knot, The Strategic Constitution (both Princeton), and Law and Economics. Ariel Porat is the Alain Poher Professor of Law at Tel Aviv University and the Fischel-Neil Distinguished Visiting Professor of Law at the University of Chicago. His books include Tort Liability under Uncertainty, Torts, and Contributory Fault in the Law of Contracts