Aporophobia: Why We Reject the Poor Instead of Helping Them (Hardcover) 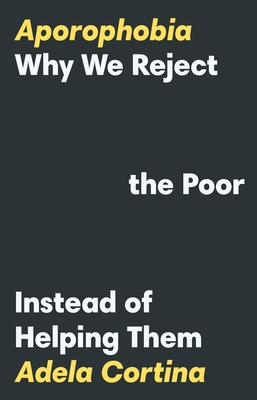 Aporophobia: Why We Reject the Poor Instead of Helping Them (Hardcover)

Why "aporophobia"--rejection of the poor--is one of the most serious problems facing the world today, and how we can fight it

In this revelatory book, acclaimed political philosopher Adela Cortina makes an unprecedented assertion: the biggest problem facing the world today is the rejection of poor people. Because we can't recognize something we can't name, she proposes the term "aporophobia" for the pervasive exclusion, stigmatization, and humiliation of the poor, which cuts across xenophobia, racism, antisemitism, and other prejudices. Passionate and powerful, Aporophobia examines where this nearly invisible daily attack on poor people comes from, why it is so harmful, and how we can fight it. Aporophobia traces this universal prejudice's neurological and social origins and its wide-ranging, pernicious consequences, from unnoticed hate crimes to aporophobia's threat to democracy. It sheds new light on today's rampant anti-immigrant feeling, which Cortina argues is better understood as aporophobia than xenophobia. We reject migrants not because of their origin, race, or ethnicity but because they seem to bring problems while offering nothing of value. And this is unforgivable in societies that enshrine economic exchange as the supreme value while forgetting that we can't create communities worth living in without dignity, generosity, and compassion for all. Yet there is hope, and Cortina explains how we can overcome the moral, social, and political disaster of aporophobia through education and democratic institutions, and how poverty itself can be eradicated if we choose. In a world of migrant crises and economic inequality, Aporophobia is essential for understanding and confronting one of the most serious problems of the twenty-first century.
Adela Cortina is professor emerita of ethics and political philosophy at the University of Valencia in Spain, and the author of many books, including Cosmopolitan Ethics and For an Ethics of Consumption.