The Profit Paradox: How Thriving Firms Threaten the Future of Work (Paperback) 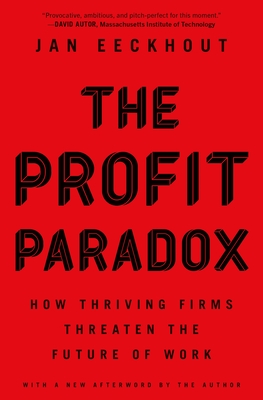 The Profit Paradox: How Thriving Firms Threaten the Future of Work (Paperback)

In an era of technological progress and easy communication, it might seem reasonable to assume that the world's working people have never had it so good. But wages are stagnant and prices are rising, so that everything from a bottle of beer to a prosthetic hip costs more. Economist Jan Eeckhout shows how this is due to a small number of companies exploiting an unbridled rise in market power--the ability to set prices higher than they could in a properly functioning competitive marketplace. Drawing on his own groundbreaking research and telling the stories of common workers throughout, he demonstrates how market power has suffocated the world of work, and how, without better mechanisms to ensure competition, it could lead to disastrous market corrections and political turmoil. The Profit Paradox describes how, over the past forty years, a handful of companies have reaped most of the rewards of technological advancements--acquiring rivals, securing huge profits, and creating brutally unequal outcomes for workers. Instead of passing on the benefits of better technologies to consumers through lower prices, these "superstar" companies leverage new technologies to charge even higher prices. The consequences are already immense, from unnecessarily high prices for virtually everything, to fewer startups that can compete, to rising inequality and stagnating wages for most workers, to severely limited social mobility. A provocative investigation into how market power hurts average working people, The Profit Paradox also offers concrete solutions for fixing the problem and restoring a healthy economy.
Jan Eeckhout is the ICREA Research Professor at Pompeu Fabra University in Barcelona and has also taught at the University of Pennsylvania, University College London, Princeton University, and New York University. His work has been widely featured in the media, including the New York Times, the Wall Street Journal, the Economist, and the Financial Times. He lives in Barcelona. Twitter @jan_eeckhout