On the Roman Pontiff: In Five Books (Paperback) 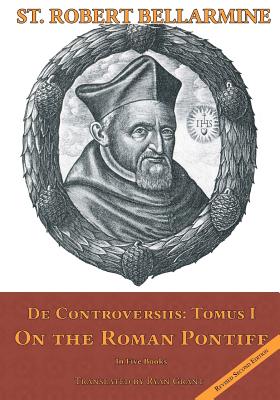 On the Roman Pontiff: In Five Books (Paperback)

"Mr. Grant is able to retain the scholastic edge along with the accuracy of the translation while preserving a sense of the author's style."

For the first time in history, St. Robert Bellarmine's work, De Romano Pontifice, On the Roman Pontiff, has been translated and made available in English

In this Theological treatise St. Robert Bellarmine takes on Protestant as well as Greek Orthodox objections to the Papacy in five books.In the first, he argues that Christ established the Primacy of Peter by means of an Ecclesiastical Monarchy, which takes up subjects as diverse as: What is the best form of government? Why it is fitting that the Church's government should be a monarchy; Exegetical Commentary on the Lord's words in Matthew 16 and John 21, along with copious Patristic testimony.

In Book 2 is whether Peter has successors in the Ecclesiastical Monarchy, wherein Bellarmine defends the Church's position on the true history of Peter; that Peter truly went to Rome; that Peter was truly a Bishop there; that upon his death he was succeeded by men in the Ecclesiastical monarchy, as well as its proof from the Fathers, then through all the refutations, Bellarmine asks what would happen if the Pope were a heretic.

In book 3, Bellarmine shows the many contradictions and faulty reasoning used by the first Protestants in arguing that the Pope is Antichrist while also giving exposition to the authentic understanding of the passages of Scripture that speak of Antichrist. After presenting the testimony of Scripture and the Fathers on the signs that must precede Antichrist, Bellarmine shows how none of this agrees with the Roman Pontiff. He also refutes the fable of "Pope Joan."

In book 4, Bellarmine argues why the Pope is infallible when he defines a doctrine on faith and morals and proceeds to defend Popes whom Protestants and others argued had erred while defining faith. He continues to a discussion of law, and why it is not contrary to the Gospel for the Pope (or a Bishop over his diocese), to make laws that bind the faithful, refuting the teaching of John Calvin.

In book 5, Bellarmine takes up the question of the Popes' power in civil affairs. Protestants had argued that the Pope tyrannously usurped the rights of sovereigns and that they meant to rule the world directly in civil affairs, while some canonists overly attached to a more medieval view were of a similar persuasion on the positive side. He then proceeds to demonstrate that the Pope's temporal power is indirect and that he can intervene for the sake of the faith when excommunicating sovereigns, but not for political reasons. The protestants argued that a Bishop could not be a temporal prince and Bishop at the same time, which Bellarmine soundly refutes from Scripture and Tradition.

This first ever English translation also has many historical notes on terms, persons, Greek and Latin syntax and other things to aid the reader. The value of the work is not merely apologetic-Bellarmine's treatise also laid down insights into Catholic teaching that were foundational not only for later Theologians but even for Vatican I.