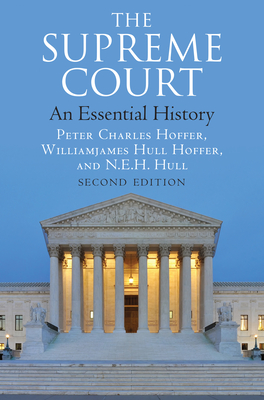 
Not On Our Shelves—Ships in 1-5 Days
For more than two centuries, the U.S. Supreme Court has provided a battleground for nearly every controversial issue in our nation's history. Now a veteran team of talented historians--including the editors of the acclaimed Landmark Law Cases and American Society series--have updated the most readable, astute single-volume history of this venerated institution with a new chapter on the Roberts Court. The Supreme Court chronicles an institution that dramatically evolved from six men meeting in borrowed quarters to the most closely watched tribunal in the world. Underscoring the close connection between law and politics, the authors highlight essential issues, cases, and decisions within the context of the times in which the decisions were handed down. Deftly combining doctrine and judicial biography with case law, they demonstrate how the justices have shaped the law and how the law that the Court makes has shaped our nation, with an emphasis on how the Court responded--or failed to respond--to the plight of the underdog. Each chapter covers the Court's years under a specific Chief Justice, focusing on cases that are the most reflective of the way the Court saw the law and the world and that had the most impact on the lives of ordinary Americans. Throughout the authors reveal how--in times of war, class strife, or moral revolution--the Court sometimes voiced the conscience of the nation and sometimes seemed to lose its moral compass. Their extensive quotes from the Court's opinions and dissents illuminate its inner workings, as well as the personalities and beliefs of the justices and the often-contentious relationships among them. Fair-minded and sharply insightful, The Supreme Court portrays an institution defined by eloquent and pedestrian decisions and by justices ranging from brilliant and wise to slow-witted and expedient. An epic and essential story, it illuminates the Court's role in our lives and its place in our history in a manner as engaging for general readers as it is rigorous for scholars.