The Making of Reverse Discrimination: How Defunis and Bakke Bleached Racism from Equal Protection (Paperback) 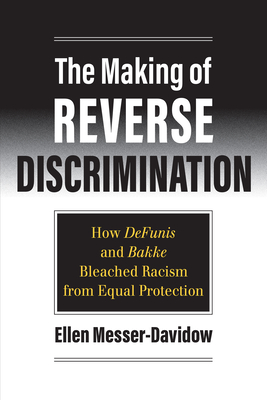 The Making of Reverse Discrimination: How Defunis and Bakke Bleached Racism from Equal Protection (Paperback)


Special Order—Subject to Availability
In The Making of Reverse Discrimination Ellen Messer-Davidow offers a fresh and incisive analysis of the legal-judicial discourse of DeFunis v. Odegaard (1974) and Regents of the University of California v. Bakke (1978), the first two cases challenging race-conscious admissions to professional schools to reach the US Supreme Court. While the voluminous literature on DeFunis and Bakke has focused on the Supreme Court's far from definitive answers to important constitutional questions, Messer-Davidow closely examines each case from beginning to end. She investigates the social surrounds where the cases incubated, their tours through the courts, and their aftereffects. Her analysis shows how lawyers and judges used the mechanisms of language and law to narrow the conflict to a single white male applicant and a single white-dominated university program to dismiss the historical, sociological, statistical, and experiential facts of "systemic racism" and thereby to assemble "reverse discrimination" as a new object of legal analysis. In exposing the discursive mechanisms that marginalized the interests of applicants and communities of color, Messer-Davidow demonstrates that the construction of facts, the reasoning by precedent, and the invocation of constitutional principles deserve more scrutiny than they have received in the scholarly literature. Although facts, precedents, and principles are said to bring stability and equity to the law, Messer-Davidow argues that the white-centered narratives of DeFunis and Bakke not only bleached the color from equal protection but also served as the template for the dozens of anti-affirmative action projects--lawsuits, voter referenda, executive orders--that conservative movement organizations mounted in the following years.