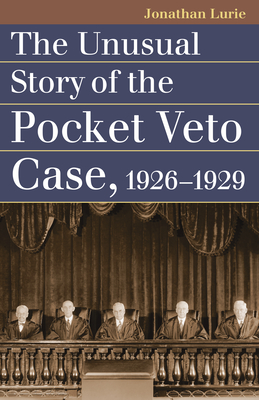 
Coming Soon—Pre-Order Now
According to the US Constitution, if a bill is not returned to Congress by the president within ten days of receiving it and Congress has adjourned, the bill is effectively vetoed. The so-called pocket veto dates at least as far back as the presidency of James Madison (1808-1816), but the constitutionality of its use had not been considered by the Supreme Court until Okanogan et al. v. United States was decided in 1929, during the last year of Chief Justice Taft's tenure. Despite responding to a situation in American Indian law, the Pocket Veto Case is notable for the fact that its final decision had nothing whatsoever to do with Indian law. The Okanogan Tribe is barely mentioned at all in the Court's unanimous opinion, delivered by Justice Edward Sanford, which ultimately concluded that the pocket veto is a constitutional exercise of presidential authority. The Unusual Story of the Pocket Veto Case explores the underlying tension between congressional authority and the executive prerogative. Especially today, with such tension very much in evidence, it becomes all the more important to understand how and why the Constitution actually appears to encourage it. Studying Okanogan et al. v. United States and use of the pocket veto provides an excellent example of the tension between Congress and the president.