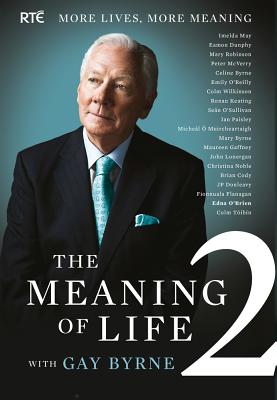 Following last year's bestselling collection of interviews from the RTE TV series The Meaning of Life, Gay Byrne is back with more big questions -- and more interesting answers.

With Peter McVerry, he ponders whether life is shaped by accidents or by the way people respond to accidents. Mary Robinson reveals the beliefs and values that fuel her formidable moral engine. Eamon Dunphy's early experiences led him to believe that "everyone is magnificent in their own way," and Edna O'Brien discusses her struggles with the Catholic Church after the infamous banning of The Country Girls.

We all look for meaning in our lives and here twenty well-known public figures share what gives their lives meaning, prompting us to ponder the question ourselves and perhaps even find some answers.

Gay Byrne is a veteran presenter of radio and television. Described by The Irish Times as "unquestionably the most influential radio and television man in the history of the Irish State," he continues in his 'retirement' to be a much loved Irish broadcaster. His most notable role was first host of The Late Late Show over a 37-year period spanning 1962 until 1999. He has presented The Meaning of Life since 2009.