Not on My Watch: How a renegade whale biologist took on governments and industry to save wild salmon (Paperback) 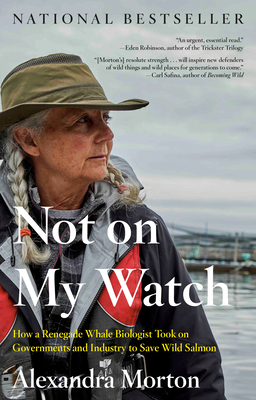 Not on My Watch: How a renegade whale biologist took on governments and industry to save wild salmon (Paperback)


On Our Shelves Now at:
NATIONAL BESTSELLER

Alexandra Morton has been called "the Jane Goodall of Canada" because of her passionate thirty-year fight to save British Columbia's wild salmon. Her account of that fight is both inspiring in its own right and a roadmap of resistance.

Alexandra Morton came north from California in the early 1980s, following her first love—the northern resident orca. Then, in 1989, industrial aquaculture moved into the region, chasing the whales away. Soon Alex had shifted her scientific focus to documenting the infectious diseases and parasites that pour from the ocean farm pens of Atlantic salmon into the migration routes of wild Pacific salmon, and then to proving their disastrous impact on wild salmon and the entire ecosystem of the coast.
Alex stood against the farms, first representing her community, then alone, and at last as part of an uprising in which ancient Indigenous governance resisted a province and a country that wouldn't obey their own court rulings. She has used her science, many acts of protest and the legal system in her unrelenting efforts to save wild salmon and ultimately the whales—a story that reveals her own perseverance and bravery, but also shines a bright light on the ways other humans doggedly resist the truth. Here, she brilliantly calls those humans to account for the sake of us all.
ALEXANDRA MORTON is a field biologist turned activist who has done groundbreaking research on the damaging impact of ocean-based salmon farming on the coast of British Columbia. She first studied communications in bottlenosed dolphins and then the sounds of captive orcas at Marineland of the Pacific in California. She then moved to the remote BC coast and found herself at the heart of a long fight to protect the wild salmon that are the province's keystone species. She has co-authored more than twenty scientific papers on the impact of salmon farming on migratory salmon, founded the Salmon Coast Research Station, has been featured on 60 Minutes, and has been key to many legal and protest actions against the industry, including the recent First Nations-led occupation of salmon farms on the Broughton.
NATIONAL BESTSELLER

“Morton’s book is a record of impassioned, long-term commitment and self-sacrifice. . . . We’ve been within a whisper of losing our wild salmon populations—as well as the endangered livelihoods of the mostly small-town and Indigenous wild salmon fleet families—if not for the work of this remarkable campaigner and researcher. . . . A modern day Joan of Arc story: her example of fighting for environmental, social, community, and multicultural justice deserves being taught to every B.C. student.” —2022 George Ryga Award judges

“[O]ne of the most important reads to come out of B.C., if not the country, this year. . . . It’s a story that’s heartbreaking, infuriating, shocking, suspenseful, and inspiring. And it’s a tale that continues to unfold.” —Stir

“[Not on My Watch] doesn’t read as an angry polemic. Rather, it’s an outline of a life spent standing up for something.” —Dana Gee, Vancouver Sun

“Alex Morton’s Not on My Watch, like Silent Spring, should touch off a national debate about rights and obligations, and while we’re at it, about decolonization. If Not on My Watch needs to be peer reviewed, those peers should include ordinary people with a thirst for justice and common sense. And every politician should be judged by their reaction to this book.” —The Tyee

“This is an important book filled with cautionary tales for anyone who cares about the environment. It is also a moving and well written human story. Highly recommended.” —Tom Sandborn, Vancouver Sun

"A devastating literary exposé of one of the greatest scandals of recent Canadian history. What begins as a wholly human memoir of a reluctant activist takes on the urgency of a murder thriller—one in which the victims are wild salmon, coastal communities, science and democracy." —J.B. MacKinnon, author of The Once and Future World: Nature As It Was, As It Is, As It Could Be

“How does a scientist and mother fight both foreign-owned fish farm cartels and lying governments? Alexandra Morton provides a thrilling recipe: a wallop of persistence, three decades of science, cups of stubbornness and the salt of undaunted courage. If the Pacific Northwest Coast's wild salmon can survive our industrial assault on their very existence, credit must go to the indomitable courage of Alex Morton and a brave renaissance in First Nations governance.” —Andrew Nikiforuk, author of Empire of Beetle and Slickwater

"Not on My Watch is an urgent, essential read for anyone who cares about the rapidly dwindling wild salmon population of British Columbia.  Meticulous, penetrating and passionate, Morton’s thorough exploration of the history and effect of placing an industrial zone in prime wild salmon habitat is chilling and infuriating." —Eden Robinson, author of the Trickster Trilogy

“If ever there was a Mother Teresa for the voiceless inhabitants of the rivers of Pacific Canada, for the salmon and orca whales and small-scale fishers and others, that unstoppable voice has been Alexandra Morton’s. Grounded in science, rooted in a just cause, driven to find answers that come only with painstaking work—and most importantly, right all along—Alexandra Morton endured decades of harassment, lies and threats by people who profit from destroying ages-old sources of life. Her resolute strength through it all will inspire new defenders of wild things and wild places for generations to come. Fundamentally, this is Alexandra Morton’s compelling, sometimes maddening story of unstoppable love.” —Carl Safina, author of Becoming Wild: How Animal Cultures Raise Families, Create Beauty, and Achieve Peace, and of Beyond Words: What Animals Think and Feel