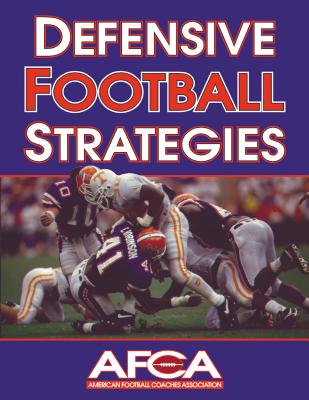 They say that defense wins championships. If so, this book is your formula for winning a title with a solid defensive football team.

Inside are 73 detailed presentations on many of football's most successful defensive systems used during the past 40 years. With the help of 600 X-and-O diagrams, the book covers these areas:

Defensive Football Strategies was developed in cooperation with the American Football Coaches Association. It's an expert resource that coaches can use to build a defense that will win it all.

Since its establishment in 1922, the American Football Coaches Association has striven to provide a forum for the discussion and study of all matters pertaining to football and coaching and to maintain the highest possible standards in football and the coaching profession. These objectives, first declared by founders Alonzo Stagg, John Heisman, and others, have been instrumental in the AFCA's becoming the effective and highly respected organization it is today.

The AFCA now has more than 10,000 members, including coaches from Canada, Europe, Australia, Japan, and Russia. Through annual publications and several newsletters, the association keeps members informed of the most current rules changes and proposals, proper coaching methods, innovations in techniques, insights in coaching philosophy, and business conducted by the board of trustees and AFCA committees. A convention is held each January to give members a special opportunity to exchange ideas and recognize outstanding achievement.

The association promotes safety in the sport and establishes strong ethical and moral codes that govern all aspects of football coaching. In addition, the AFCA is involved in numerous programs that ensure the integrity of the coaching profession and enhance the development of the game. It works closely with the National Collegiate Athletic Association, the National Association of Collegiate Directors of Athletics, the National Association of Intercollegiate Athletics, the National Football League, the National Football Foundation and Hall of Fame, Pop Warner, and other organizations involved in the game of football. Indeed, one of the goals of the association is to build a strong coalition—TEAM AFCA—of football coaches who will speak out with a unified voice on issues that affect the sport and profession.

The AFCA is the team of the football coaching profession. All current and former football coaches or administrators involved with football are encouraged to join. For more information about becoming a member of the American Football Coaches Association, please log on to the AFCA Web site (www.afca.com) or contact them at the following address: