80/20 Triathlon: Discover the Breakthrough Elite-Training Formula for Ultimate Fitness and Performance at All Levels (Paperback) 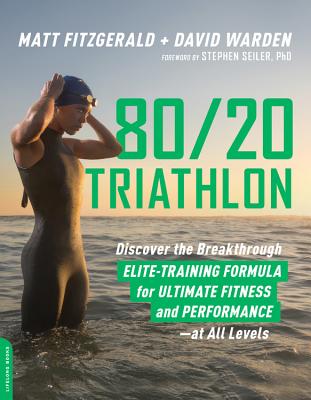 80/20 Triathlon: Discover the Breakthrough Elite-Training Formula for Ultimate Fitness and Performance at All Levels (Paperback)


Not On Our Shelves—Ships in 1-5 Days
A breakthrough program for triathletes -- beginner, intermediate, and advanced -- showing how to balance training intensity to maximize performance -- from a fitness expert and elite coach.

Cutting-edge research has proven that triathletes and other endurance athletes experience their greatest performance when they do 80 percent of their training at low intensity and the remaining 20 percent at moderate to high intensity. But the vast majority of recreational triathletes are caught in the so-called "moderate-intensity rut," spending almost half of their time training too hard--harder than the pros. Training harder isn't smarter; it actually results in low-grade chronic fatigue that prevents recreational athletes from getting the best results.

Matt Fitzgerald is an endurance sports writer, nutritionist, and author of more than twenty books. He is a coach and spokesperson for PEAR Sports and former senior editor at Triathlete and Competitor. Fitzgerald has contributed to Men's Health, Outside, Runner's World, Shape, and other publications. He lives in Northern California with his wife, Nataki.