Tesla: Man Out of Time (Paperback) 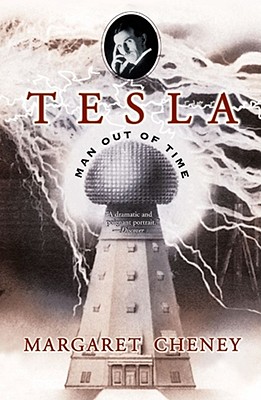 Tesla: Man Out of Time (Paperback)


Not On Our Shelves—Ships in 1-5 Days
In this “informative and delightful” (American Scientist) biography, Margaret Cheney explores the brilliant and prescient mind of Nikola Tesla, one of the twentieth century’s greatest scientists and inventors.

In Tesla: Man Out of Time, Margaret Cheney explores the brilliant and prescient mind of one of the twentieth century's greatest scientists and inventors. Called a madman by his enemies, a genius by others, and an enigma by nearly everyone, Nikola Tesla was, without a doubt, a trailblazing inventor who created astonishing, sometimes world-transforming devices that were virtually without theoretical precedent. Tesla not only discovered the rotating magnetic field -- the basis of most alternating-current machinery -- but also introduced us to the fundamentals of robotics, computers, and missile science. Almost supernaturally gifted, unfailingly flamboyant and neurotic, Tesla was troubled by an array of compulsions and phobias and was fond of extravagant, visionary experimentations. He was also a popular man-about-town, admired by men as diverse as Mark Twain and George Westinghouse, and adored by scores of society beauties.
From Tesla's childhood in Yugoslavia to his death in New York in the 1940s, Cheney paints a compelling human portrait and chronicles a lifetime of discoveries that radically altered -- and continue to alter -- the world in which we live. Tesla: Man Out of Time is an in-depth look at the seminal accomplishments of a scientific wizard and a thoughtful examination of the obsessions and eccentricities of the man behind the science.
Margaret Cheney is a biographer of unusual versatility. In addition to her two major studies of Tesla (most recently Tesla: Master of Lightning, with Robert Uth), she has written Midnight at Mabel's, a biography of the great cabaret singer and song stylist Mabel Mercer. Cheney is also the author of Meanwhile Farm and Why: The Serial Killer in America. She lives in California.
Discover A dramatic and poignant portrait.

American Scientist Excellent...a significant contribution to the recent history of science...informative and delightful to read.

Choice Cheney's excellent biography of one of the most idiosyncratic and truly enigmatic "scientists" is both comprehensive and well written...very warmly recommended.