The Greatest Minds and Ideas of All Time (Hardcover) 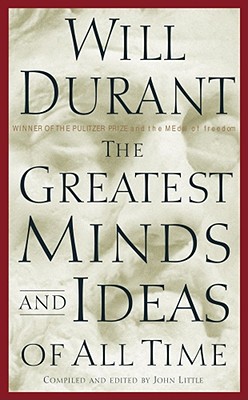 The Greatest Minds and Ideas of All Time (Hardcover)


Not On Our Shelves—Ships in 1-5 Days
A wise and witty compendium of the greatest thoughts, greatest minds, and greatest books of all time—listed in accessible and succinct form—by one of the world's greatest scholars.

From the “Hundred Best Books” to the “Ten Greatest Thinkers” to the “Ten Greatest Poets,” here is a concise collection of the world’s most significant knowledge. For the better part of a century, Will Durant dwelled upon—and wrote about—the most significant eras, individuals, and achievements of human history. His selections have finally been brought together in a single, compact volume. Durant eloquently defends his choices of the greatest minds and ideas, but he also stimulates readers into forming their own opinions, encouraging them to shed their surroundings and biases and enter “The Country of the Mind,” a timeless realm where the heroes of our species dwell.

From a thinker who always chose to exalt the positive in the human species, The Greatest Minds and Ideas of All Time stays true to Durant's optimism. This is a book containing the absolute best of our heritage, passed on for the benefit of future generations. Filled with Durant's renowned wit, knowledge, and unique ability to explain events and ideas in simple and exciting terms, this is a pocket-size liberal arts and humanist curriculum in one volume.
Will Durant (1885–1981) was awarded the Pulitzer Prize (1968) and the Presidential Medal of Freedom (1977). He spent more than fifty years writing his critically acclaimed eleven-volume series, The Story of Civilization (the later volumes written in conjunction with his wife, Ariel). A champion of human rights issues, such as the brotherhood of man and social reform, long before such issues were popular, Durant’s writing still educates and entertains readers around the world.